Since it was really only a lunch stop we didn't have much time to see Bergama but at least we
did get to see the huge red brick Basilica built by Hadrian in the 2nd century AD as a temple to the Egyptian god, Serapis.  It was later converted to a Byzantine church and today has a mosque within its walls. It was closed for restoration work when we visited, nevertheless we had a pretty good view of it through the security fence.


Bergama is famous for its woollen carpets and several carpet shops had their rugs spread along the pavement for passers by to walk on. They don't mind  foot traffic on their rugs, saying that it "seasons" them.  The town was sleepy and we enjoyed being the only tourists around, strolling the perimeter of the Basilica, spotting a local tradesman's donkey and cart and a number of tortoises sunning themselves on rocks in the river.  For lunch we found a "locals" café where I had a huge kebab, stuffed to bursting with chicken and salad, and an ayram drink,  $1.75NZ all up, it was the bargain of the century.  One of our group spotted a fruit drink in the fridge and took a hefty swig only to realise it was a very strong vinegar.  The look on her face was priceless!

A couple of hours later, and after turning on to a winding, bumpy and, at times, hair raising, cliffside road  we arrived at the
tiny beachside settlement of Iskele, our overnight stop.  Several hotels line the beachfront with wooden sun bathing platforms built right out over the water.  I was surprised at how dirty and littered the actual beach was.  It seems nobody bothers to clean it, since nobody goes on it, such a shame. Nevertheless, Iskele was a picturesque little place with small fishing boats tied up along the sea wall and a magnificent sunset to enjoy during our pre dinner drinks.  As the sun went down and the evening turned cool the hotel staff arrived with warm pashminas for us all, a much appreciated touch. Later we enjoyed a delicious traditional Turkish meal of mezze, sea bass followed by kumar pasha for desert. 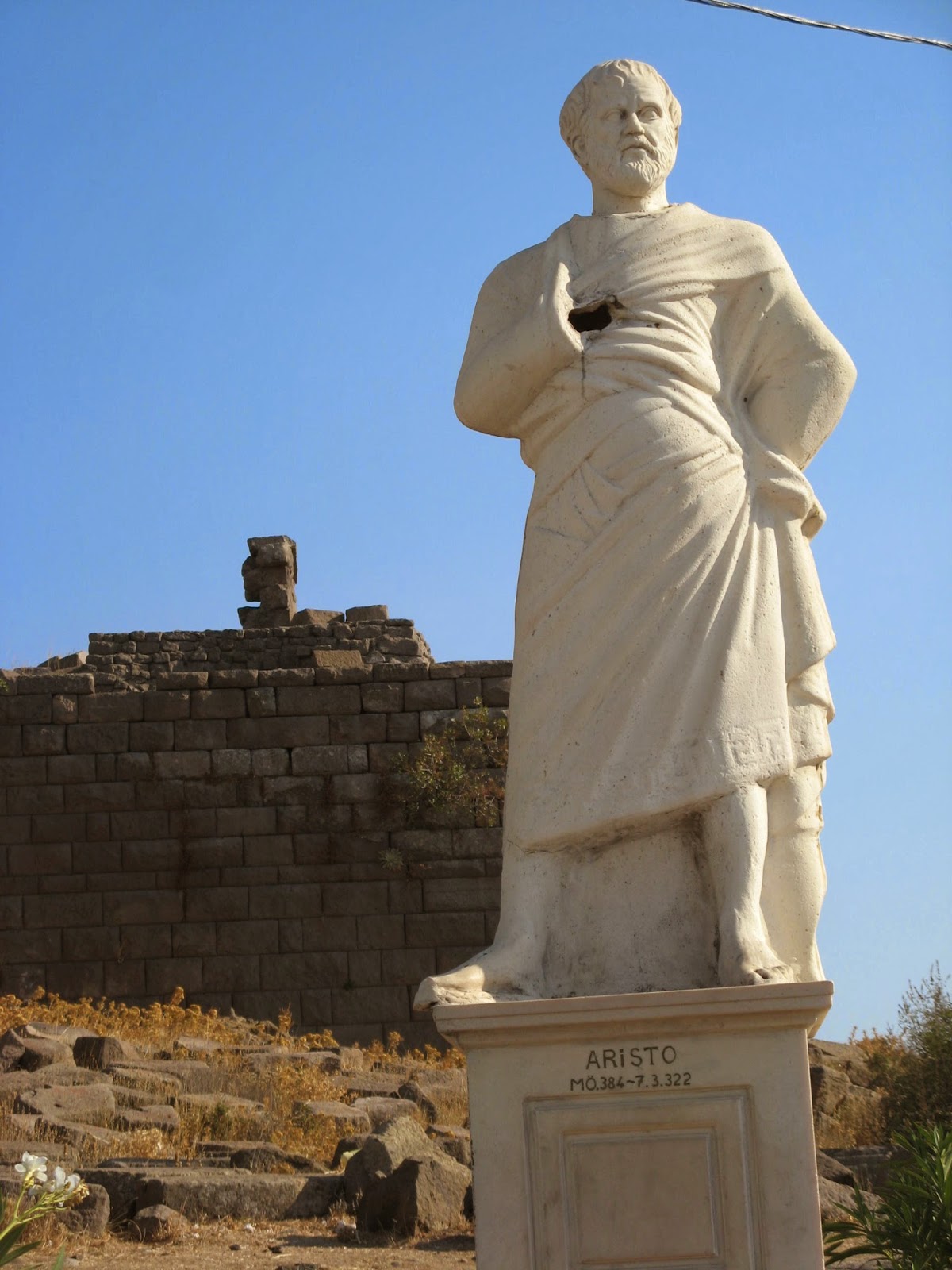 Next morning there was time for a walk along the sea wall to bask in a golden sunrise before leaving to visit Assos,  on the top of the mountain, and the ruined temple to Athena.  Aristotle opened an academy in Assos and attracted a group of other philosophers to study there.  When the town was attacked by the Persians he fled to Macedonia. Today  a modern statue of Aristotle, minus a hand, takes pride of place at the entry to the village.  St Paul also visited Assos on his travels. The ruined temple to Athena  has 6 of the original 38 pillars standing and commands breath taking views across the Aegean Sea and out to the Greek island of Lesbos.  It was so peaceful there with nobody else around save a friendly, toothless, old man clutching a handful of herbs which he wanted to sell to us.


Then it was onto Troy where we were met by our guide, Mustafa, an erudite and articulate fount of knowledge.  Mustafa told us that he had grown up in Troy, playing hide and seek among the ruins and building forts with the old rocks and stones lying around, something that would be forbidden today. Troy dates from the bronze age when it was established by the Hittites and was immortalised by Homer in The Iliad.

Our first stop was to have our photo taken in the replica wooden horse.  It was a fun thing to do and, thankfully, the only touristy thing about Troy. Of course there is no evidence that there ever was a wooden horse but it's a good story.  Originally built in a valuably strategic position, on the coast, where it had complete control of the Dardenelles, Troy today is 5 kilometres from the sea due to silting up of the harbour. The city had 9 levels of settlement, the earliest 3,500 years ago.  The last king of Troy was Priam who had many wives and children,including 50 sons.  His naughtiest child was the famous Paris who abducted Helen, daughter of the king of Sparta, thus triggering the Trojan war. Many battles were fought over Troy and so the city was built with many ramparts and defences.
﻿﻿
I was particularly intrigued by the curved corridor leading to the city gates designed to ensure there was not enough room to use a battering ram to knock the doors down. Coming from a country as young as New Zealand it is always fascinating to visit places hundreds, if not thousands of years old.  Troy didn't disappoint, there are still solid walls and ramparts dating back 3,500 years.


Mustafa was an excellent guide, a respected scholar, author of several books on Turkish history and had the ability to bring Troy to life for us.  Later we had lunch at his family run restaurant, just down the road and were surprised to see him mucking in serving hot chips to hordes of hungry visitors.

Posted by a wandering widow - solo travel at 15:44