I love living in a country where the seasons change, where long hot summers turn to mellow autumns and where cold, rainy winters turn to vibrant, colourful springs. It is always a pleasure to enjoy that first barbecue in summer or the first bowl of soup in winter, to see the flamboyant reds and yellows of maple leaves in autumn and the shy, peeping buds and lime green leaves of  trees in spring. Each change is a cause for celebration, however, of all the seasons I think autumn is my favourite.  In my home town of Auckland autumn often means still days where the sun glitters on a calm sea and the cooler weather makes it perfect for walking or playing sport. It is fun at the end of the day to draw the curtains, curl up with a good book and get cosy. Much as the thought of an endless summer on a tropical island appeals I know I would miss the anticipation and pleasure which each season brings.

Many poets have written about the joys of autumn.  I wish I had their eloquence! All I can offer are a few photos, so here they are, my Ode to Autumn.

Autumn, you are welcome. Please come again next year.

(all photos are my own)
Posted by a wandering widow - solo travel at 18:53 No comments:

I find it too easy to get into a boring old rut with cooking, always making familiar, tried and true recipes, mainly because I feel confident they will turn out well but also because I'm a bit lazy. However, when I'm in the mood I like to experiment and try something new.  This weekend I was asked to a dinner party to farewell lucky friends who are off to live on their vineyard.  I offered to make the desert.  As luck would have it I am in the middle of a creative period so scanned my recipe books for inspiration.  My London based daughter in law had sent me a Nordic recipe book for Christmas, apparently all things Nordic are very fashionable in London right now, so that was my first "go to" for a new recipe. This one caught my eye because it bears  my name.  I'm pleased to say there were plenty of oohs and aahs around the table at the dinner party, everybody seemed to enjoy it as much as I did.  I now know this will become one of my favourites for special occasions (yes, I know it has a lot of sugar in it but it is a "now and then" desert) and here it is: 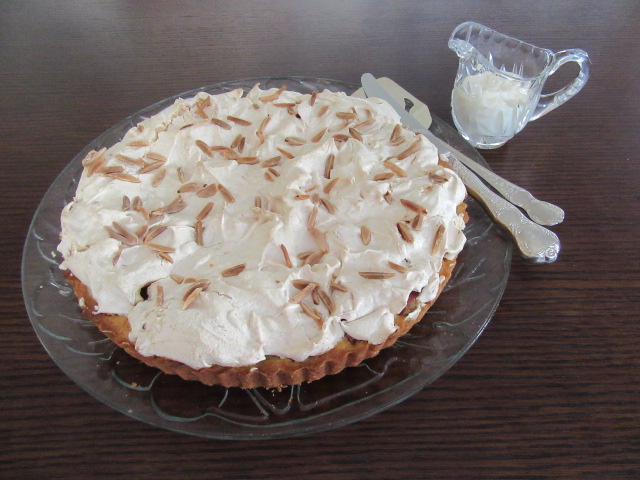 A loose bottomed 10 inch flan tin, greased. (I didn't grease mine and the flan came out no trouble)

Cream the butter and sugar together in a food processor until pale and creamy.  Add the egg yolks one at a time mixing well. In a separate bowl mix the flour and baking powder together, then add half the flour mixture into the butter mixture, blending well. Add half the milk, mix well and then add the second half of the flour mixture and the remaining milk and mix well. Press this mixture into the flan tin, evenly covering the bottom and sides.

Filling: mix the rhubarb, cinnamon and 2 teaspoons of the caster sugar together and spread evenly over the shortcake base.
Whisk the egg whites until they are firm and hold soft peaks then gradually add the rest of the sugar and beat until thick and glossy.  Stir in the vanilla extract and pile the meringue on top of the shortcake.  Don't smooth it out, keep it in little peaks.  Place in the oven.  After 10 minutes quickly sprinkle the almonds over the top without removing the flan from the oven and continue to cook for another 25 to 30 minutes.

I served this with a thick vanilla bean custard but you could also serve it with cream or ice cream.  It is delicious.  I am so pleased my name caught my eye!

This recipe is an adaption of the recipe in NORDIC BAKERY COOKBOOK by Miisa Mink.

I can't wait to try other recipes in the book now.


Posted by a wandering widow - solo travel at 14:24 No comments:

Karaka Bay, Auckland - an historic site right on my doorstep

Excuse the first fuzzy frames - it gets better, I assure you! 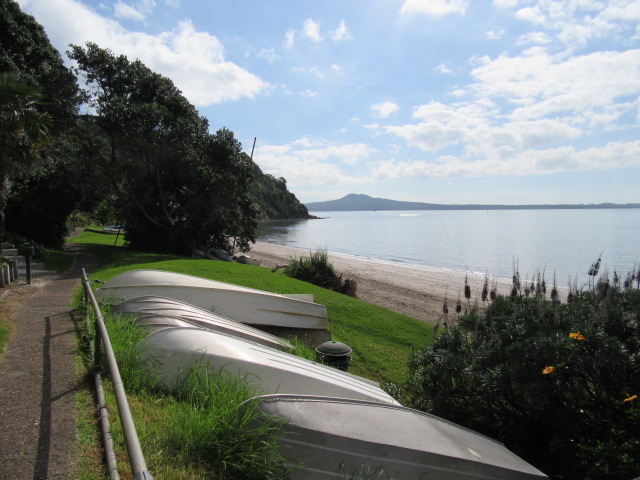 A short walk from my home is beautiful Karaka Bay and since today was a calm, sunny autumn day  I decided it would be perfect for a walk to one of my favourite places.

There is a bookshop in Auckland called The Hard to Find Bookshop and their byline is "but worth the effort".  The same could be said for Karaka Bay.  Located at the end of  short, sloping, Peacock Street, the bay  is accessed by a long, steep, winding path.       ( NB: take everything with you,  you do not  want to run back to your car for forgotten items!) However, when you get there you will agree, it truly is worth the effort.

Karaka Bay is named after the karaka trees that used to grow there and it was once the site of a Maori Pa or village.  It was here that Governor Hobson, on behalf of the British Crown, signed the Treaty of Waitangi, in March 1840, together with the chiefs from 17 Maori tribes. The Treaty is considered to be the founding document of New Zealand as a nation and the signing  is commemorated on a plaque on the path leading to the bay.  In early 2015 a reenactment of the signing was held at the beach.  At the time I had  French and Japanese house guests so took them along to the ceremony to their great delight. 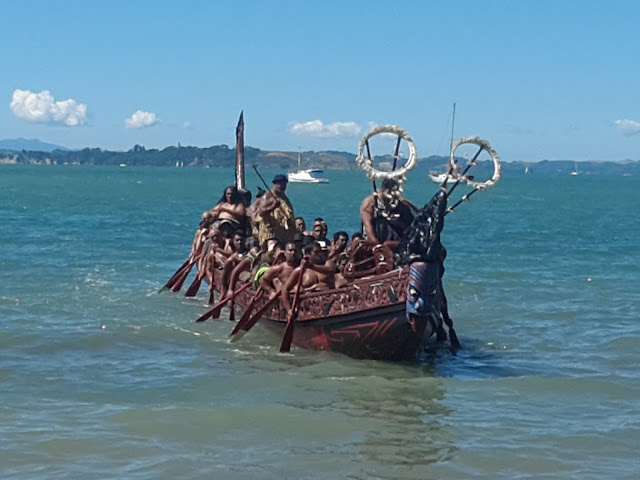 Nowadays the bay is home to writers, artists, architects and professional people.  The houses in the bay are a mix of old baches (holiday cabins), converted boat sheds and plush new architecturally designed homes.  It has a strong bohemian vibe and the residents are pretty proud of their independent spirit and occasional flouting of city rules, such as planting vegetable gardens and fruit trees on the grassy area above the beach and placing their own colourful furniture out there too.

Tibetan prayer flags fly from bamboo stakes and, at times, the residents  hold community beach parties complete with a  jazz band.  I have been told that when the city council objected to a resident having an outdoor shower the residents arranged to be there when the city inspector arrived. Confronted with a line of naked residents waiting for a shower, the inspector fled, or so the story goes. One resident owned a large pig as a pet which he allowed to free range.  Other residents became annoyed by the pig's deposits on the beach and declared  the pig had to go, which it did, but not before a children's book was written about it. The difficult access ensures the residents co-operate with each  so  will  collect each others mail and packages from the letterboxes up the track above the beach if they are returning from a trip out. 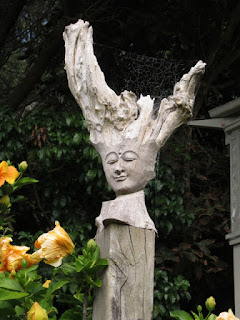 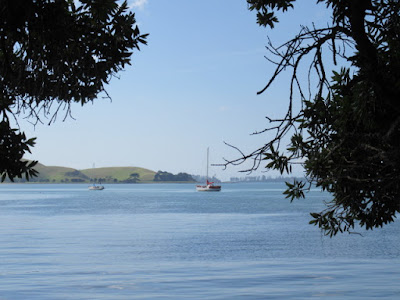 Sometimes in summer I like to take a book and sit on the beach and read.  It is a peaceful, beautiful place, the only sounds, the sea lapping the beach and the occasional bird call.  Today I had the beach completely to myself. How lucky am I to live so close to this beach, less than 15 minutes from the city centre but seemingly hundreds of miles away?
Posted by a wandering widow - solo travel at 20:45 No comments: