Beijing - The Heavenly Temple and locals at play

One of the things I love most about travel is learning about and experiencing another culture.  I enjoy seeing locals go about their normal lives and, if possible, joining in, which is why dancing with the locals at an exercise class in Xi'an was such a thrill.  In Beijing we were making a visit to The Temple of Heaven and our approach through the Long Corridor located in  the 267 hectare (660acre) park which surrounds the Temple gave us the perfect opportunity to mix and mingle with the locals and see them enjoying some leisure time.
The long corridor, originally built as a passageway for the delivery of offerings to the gods, is now a favourite hang out for elderly Chinese as a place for them to play cards, listen to the radio, play instruments, sing or show off their pet birds.  It is my kind of place.  Our guide told us that since the retirement age for women is 55 and for men 60 and most Chinese, despite the abolition of the 'one child' rule, have one child only, older Chinese find they have a lot of time on their hands so enjoy the camaraderie of joining together in the park to share their hobbies. They seemed like happy souls and we were greeted warmly by everyone we passed.  Some of our group admired pet birds and their proud owners were only too keen to allow the birds to perch on my fellow travellers arms. 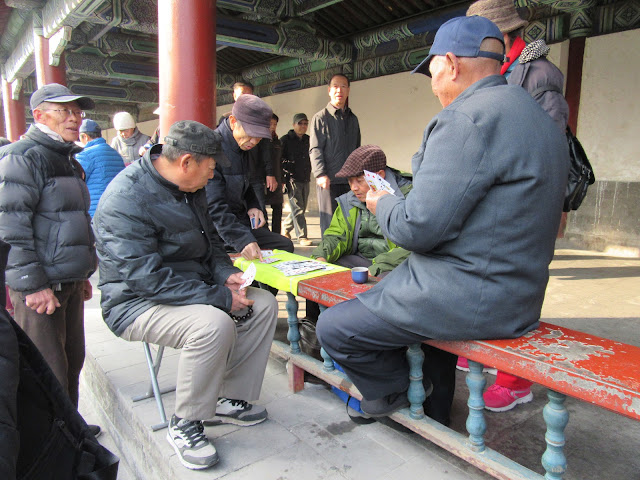 There were clearly some very serious card games going on but since gambling is illegal in China players were simply playing for pride and satisfaction.  The large park also contains a Marriage Market where people can advertise for a spouse and a marriage broker will then try to find them a suitable partner. Some of the singles in our group joked that there might be an opportunity there! 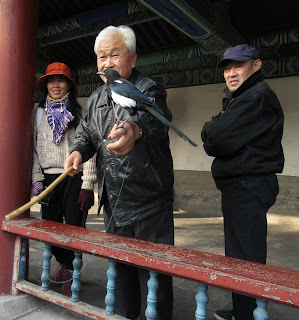 But onto the point of our visit, the stunning Temple of Heaven.  Originally built between 1406 and 1420 during the reign of the Ming emperor, Yongle, who was also responsible for the building of the Forbidden City,  The Temple of Heaven consists of three main buildings with the stunning  Hall of Good Harvests as the centre piece. The Hall of Good Harvests, built entirely of wood and without any nails, was struck by lightening in 1889 and burnt to the ground. It was rebuilt to the original plan soon after. It is here the emperors came to pray each year for good harvests, good weather and prosperity. The Hall is 36 metres (118 feet) round and 38 metres (125 feet) high with three tiers and boasts absolutely beautiful, brightly coloured, painted decorations. 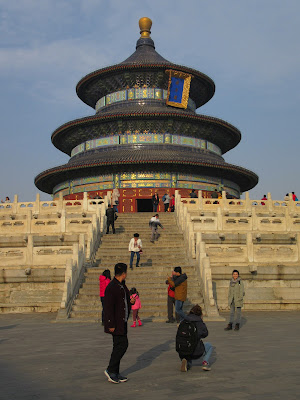 In Chinese tradition earth is square and heaven is round and the hall reflects this being built on a large square. Ornate marble terraces lead up to the hall which is a high point of the surrounding area, so it does give the impression of climbing up to heaven.  The large courtyard below houses two large oblong halls and there are many other ceremonial buildings within the complex which covers a greater area than The Forbidden City, because in Chinese tradition no man could have a greater estate than that dedicated to the gods. The Hall of Good Harvests is certainly a show stopper and with its view out over the city, countryside and out to the mountains it has a position befitting its status. 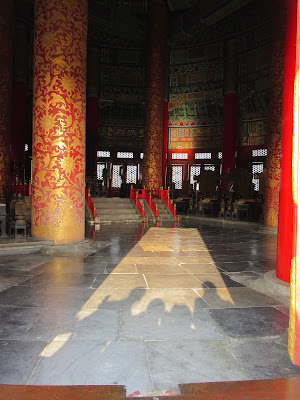 Above: The Hall of Good Harvests

Right: A Glimpse inside


We had had a full and amazing day sight seeing around Beijing so were looking forward to free time in the late afternoon and evening.  A few of us decided to find a shopping centre near our hotel and set out to walk there.  Although furnished with instructions, albeit sketchy, in the end we couldn't find it, however we did see some interesting street life along the way, like the roadside hairdressers who set up chairs on the footpath, add mirrors to the street fence and seem to have a busy time with clients judging by the amount of hair at their feet.

A few of us walked back in the opposite direction to a big, glamorous shopping mall, not what we were after but it proved to be another insight into modern China. The multi level mall was glossy, modern and crammed with expensive shops.  I was astonished at the prices, pretty much everything was far more expensive than they are in my home town. The shops were not the high end lines that you would expect to see at an airport, these were the same type of shops you would see in any modern mall, obviously catering to the wealthy middle classes who were shopping there in numbers and clearly indulging their only children.  China has certainly changed over the last few years.  The mall was an eye opener and an entirely different world from that of the road side hairdressers.
Later we spent a sociable evening enjoying the company of our fellow travellers and full of anticipation for our next great adventure and one of my 'bucket list' items - climbing the Great Wall.


Posted by a wandering widow - solo travel at 16:35 No comments:

Email ThisBlogThis!Share to TwitterShare to FacebookShare to Pinterest
Labels: Beijing, The Hall of Good Harvests, The Heavenly Temple, The Long Corridor

A thick orange coloured smog greeted us on arrival in Beijing, luckily,  by the next morning, the city was boasting beautiful sunny weather and the clearest of blue skies which remained with us for our whole visit.  It was a pleasant drive from the airport to our hotel  along pretty park like boulevards, the result of the controversial demolition of many houses, despite residents' protests, in order to beautify the city for the  2008 Olympics.
Beijing has a population of around 21.50 million and as the capital city of China is a draw card for millions of tourists from both overseas but mainly from within China.  We were pumped with anticipation, there is a lot to see in this ancient city.


Next morning we set off for Tiananmen Square.  This is where I strongly recommend being part of a tour group.  Since Tiananmen Square is a bucket list place for many Chinese they arrive in their thousands on a daily basis and stand in interminable queues waiting to get in. We, on the other hand, led by our guide clutching pre-booked tickets, sailed past them, oblivious to the scowls and bemused stares of the crowd. 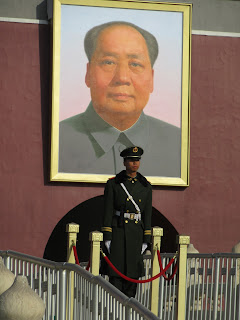 Built by Mao Zedong, Tiananmen Square is the centre of the General Assembly of China and is said to be one of the largest public squares in the world with a capacity of  more than 1 million people.  To one side of the square is  a large monument to the Peoples' Heroes of the Revolution and Mao's mausoleum, where a never ending queue patiently waits its turn to pay respects. The General Assembly building takes centre stage and on the other side of the square is a massive portrait of Mao.  Prior to our arrival we were warned not to mention anything about the student and workers' uprising of 1989 while in the square or to ask anything about the tanks etc.  Discussion of the military crackdown is prohibited in China and there are plain clothes, secret service agents with English speaking skills located around the square whose job is to listen to conversations and make arrests if necessary.  The Chinese are clearly very twitchy about potential subversion. Actually, the agents were pretty easy to spot as they fiddled with their cell phones and lent on railings but we stayed true to the advice and just drank the whole scene in.


We were also told that since the square is a place of pilgrimage, which many Chinese save  their whole life to visit,  we would be a curiosity to back country Chinese who had never seen Europeans before.  Our guide even went so far as to suggest they would think we were film stars.  That's as close as I'll ever get to being one! My fair hair  and blue eyes attracted attention and I can't tell you how many photos I am in. It was amusing to notice people surreptitiously posing behind me for a shot with the strange foreigner. We had a good wander around the square, time for a quick group photo and then made our way to the entrance to The Forbidden City, right beside the square.
The Forbidden City, so called because entrance was forbidden to commoners, was built in 1406 and was home to 14 Ming Emperors and 10 Qing Emperors until the last emperor abdicated in 1912 when China became a republic.  Also known as The Palace Museum it is vast, covering 720,000 sq meters (7,750,000 sq feet). It contains 90 palace quarters and courtyards, 980 buildings and at least 8728 rooms. It is known as a masterpiece of Chinese architecture and boasts the worlds largest collection of well preserved wooden, medieval buildings.


I found it an intriguing step back in time, imagining the emperors in  glorious robes walking through the vast treeless squares with servants and officials scurrying about them.

I was very taken by the beautiful, painted detailing on the buildings and the elaborate marble railings on the tiered balconies leading up to the palace buildings but, as someone who loves trees and gardens, I thought the vast paved squares with neither tree nor flower a bit soulless. Trees were not planted since they would have been good hiding places for assassins and would also interfere with the squares' primary purpose of holding grand and solemn ceremonies.  However, we did stroll through a walled garden containing large ancient trees within the city complex.  Now a UNESCO World Heritage site the Forbidden City is definitely a "must see".  It's vastness is a bit hard to take in and there is so much room that despite the fact there were many thousands of other visitors there we never felt bustled or as if we were in a crowd. 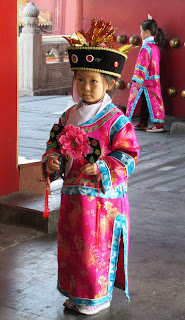 As with so many grand palaces around the world you can't help but ponder the narcissism and entitlement of those who built them and lived in them but on the other hand you can delight in the extraordinary treasures they have left which many millions of people can now enjoy.  I thought it was amazing and am so glad to have seen it.

So far it had been a fascinating day with a mix of modern history, politics and ancient, dynastic grandeur.  There was more to come which I will write about in my next post.

Right: She looked so darned cute, I had to get a photo, with her mother's permission.
Posted by a wandering widow - solo travel at 14:53 No comments: