Flavigny is in the Burgundy region of France, about an hour from Dijon.  It is famous for its aniseed sweets and as the location of the film "Chocolat", a fact that draws in the tourists. It is easy to see why it was chosen for the film, it is utterly delightful, in fact my sister-in-law, Mary, and I agreed it was the prettiest village we saw during our travels in France.  It is tiny, with a population of around 320, and is built on a hill around a Benedictine abbey which dates back to 719. Monks still inhabit the monastery and, if you are lucky, you may catch their Gregorian chants if you are in the village at the right time. 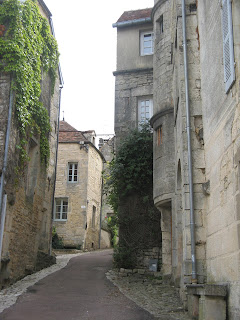 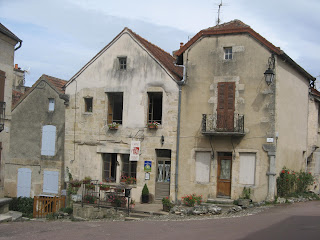 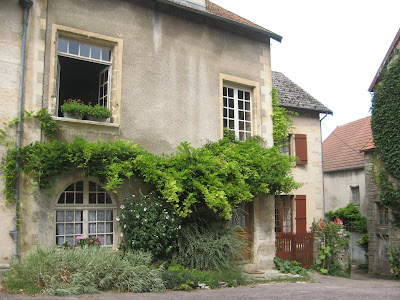 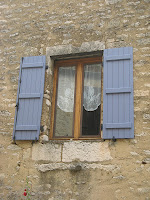 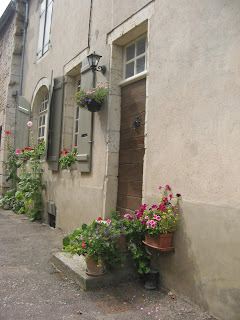 Walking through Flavigny is like walking back in time.  Tiny cobbled lanes wind between quaint stone houses with their ubiquitous blue shutters and colourful window boxes, the only sounds to be heard are birds chirping or the occasional  greetings called between villagers. It was very peaceful with hardly anyone around as Mary and I picked and poked for a couple of hours, idiotic grins plastered on our faces....we were in love with this village.  At one point we ventured into a shop selling an assortment of crafts, antiques, paintings and books.  The owner was a delightfully bohemian woman in her thirties who appeared to live in the shop, we spotted a bed behind a curtained off area,  her young son was playing with toys in part of the shop which looked like a living room.  We felt as though we had walked into a film set and as we wandered on we imagined a film script to suit her.  At mid-day the angelus bells rang from the village church and a priest, traditionally dressed in a soutane, strolled down the road to the church. 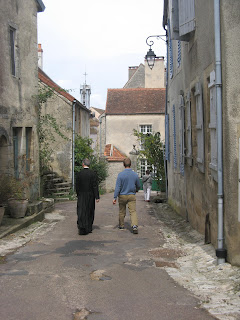 Lunch time called and we lucked into a fantastic find.  Unbeknown to us we were to have the best meal we were to have on the whole trip.  In the church square is the La Grange Farmhouse Restaurant.  Although the streets of the village were very quiet the restaurant was busy with people arriving all the time.  We knew it must be good.  On a tiny kitchen sized stove a middle aged woman was producing delicious meals, real farmhouse cooking.  The menu consisted mainly of flans, of all description, most savoury and some sweet.  These were served with simple tossed salads.  The food was so mouth wateringly delicious we were at a loss to know how it was done.  We watched as the salad was tossed fresh for each customer and could see that the ingredients were simple and straight forward nevertheless we had never tasted salads so good.  There must be some magic in Flavigny. 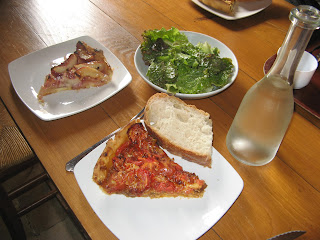 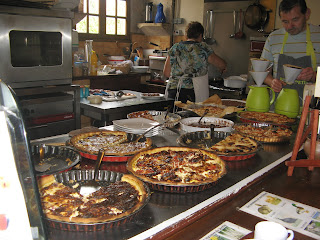 After lunch, and buzzing with delight at it all, we visited the famous Flavigny aniseed shop located in the old convent.  These sweets, in their beautiful tins and consisting of many flavours, all including aniseed, are famous all over the world.  We had a great time sampling and bought several tins each as gifts. Also in the village is a textiles museum, unfortunately it was not open while we were there but we peered through the windows for a small glimpse of their displays.

Flavigny is a delight, the epitome of a romantic French village seemingly untouched by time yet with several discreet businesses, reminiscent of the chocolate shop in the film Chocolat, which keep the locals employed. 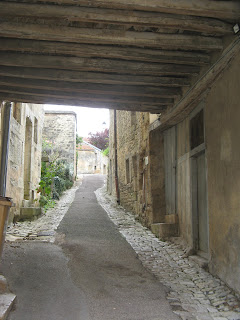 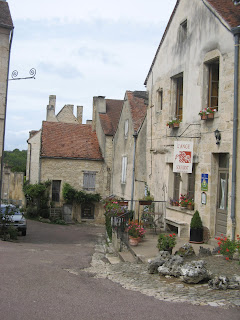 Posted by a wandering widow - solo travel at 16:13 No comments: