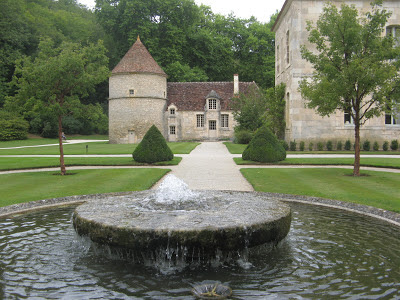 One day Mary and I decided to take a drive through  the beautiful Burgundy countryside to visit Fontenay, one of the oldest abbeys in Europe.  There is something about old abbeys that I love.  I think it is the peace, the tranquility, the history and the sense that the ancient stone walls have somehow absorbed centuries of service and prayerful reflection.  Well that is how old abandoned abbeys feel today but it is not how they would have been when they were first founded and flourishing. When it was founded by St Bernard in 1118 it would have been a bustling self contained community of 300 monks living a prayerful, contemplative life but also working hard to produce all the community's needs. The years of back breaking work the monks undertook to drain the marsh in order to build the abbey paid off and today this stunning property lies in a valley surrounded by magnificent trees and gardens.


The abbey flourished until the 12th century and became famous for its successful farming practices but it entered a decline when the French monarchy took it upon itself to nominate "commendatory abbots" to lead the abbey.  Later it was ransacked during the 100 years war with England so that by the time of the French revolution there was only a handful of monks remaining. The abbey was sold as a national property in 1790 and for 120 years  was used as a paper mill. In 1906 Edouard Aynard, a banker and art collector, bought the abbey in order to restore it.  He dismantled all remnants of the paper mill and returned it, as much as possible, to its original glory.  It is still owned  by the Aynard family and has been on the Unesco World Heritage list since 1981. It is a beautiful, austere place.


The church is huge, 66 metres long and 16.7 metres high.  It has long been stripped of all decoration and has a gravel floor but to my mind that makes it all the better. I found looking up to the ceiling or down the length of it in a gloomy half light was quite awe inspiring.  The original dormitory for the monks adjoins the church with direct entry so that the monks could go straight to their prayers first thing in the morning. The romanesque cloisters, (cloisters are always my favourite part of an abbey), are lined with council rooms, a common room and work rooms where manuscripts were painstakingly illuminated. The forge is an impressive building, 53 metres long.  It was here the monks extracted iron ore from rocks quarried near by.  The Fontenay stream which passes the abbey was used to power the tilt hammer and bellows of the forge where the monks produced a wide variety of tools and implements which they sold to surrounding villagers.

Other buildings include a warming room, the Abbots lodgings, a wayfarers chapel and bakery, the gatehouse and hostel where pilgrims were accommodated.  There is also a large dovecote with walls 1 metre thick.

The gardens have been developed much later by the private owners of the abbey, and are tranquil and beautiful with trickling fountains, large trees and immaculate bowling  green lawns. 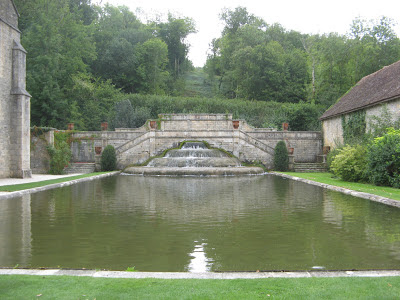 I thoroughly enjoyed my visit here.  It felt like a "good" place.  I would have been happy to spend several days sitting in the gardens with a good book or just quietly contemplating the surroundings.
Posted by a wandering widow - solo travel at 20:33 No comments: