Wow!  I can't believe it!!  My little hobby travel page has now had over 30,000 readers, 30,066 to be precise and  I'm tickled pink.  It is satisfying to know that there are people all around the world reading and finding something of interest on my blog.  A huge thank you to all of you!

When I hit the 10,000 and 20,000 marks I sent a small gift to the person who got me there but this time I was taken by surprise by a web address in Mauritius which made multiple visits today and pushed me well over the mark.

Writing this blog  has kept me motivated to get out and do things in order to have something interesting to write about.  It is also a handy diary of what I've been up to, so it's been a win/win all round.

Don't hesitate to put remarks - good or bad - in the comments section. I'd also love your feed back on what New Zealand  topics and/or places you would find of interest and then I will aim to please :-)

I am off on another international adventure shortly so, hopefully, will have a lot more of interest to write about. I'm getting excited with the very thought of it!

Meanwhile here are my 5 most popular posts:

Posted by a wandering widow - solo travel at 22:07 No comments:

I'm a great fan of Haiku, the Japanese poetry discipline which manages to say a lot in very few words.    The art of Haiku is to establish a thought provoking image, traditionally, but not always, using just seventeen syllables in a 5-7-5 pattern. The idea is to take imagery from nature as a basis for deeper philosophical thought.

Although it is now winter in New Zealand my garden is acting like it is late autumn, the scarlet leaves still gently falling from my maple trees. The leaves give me great pleasure and have inspired me to re-read a few autumnal haiku. 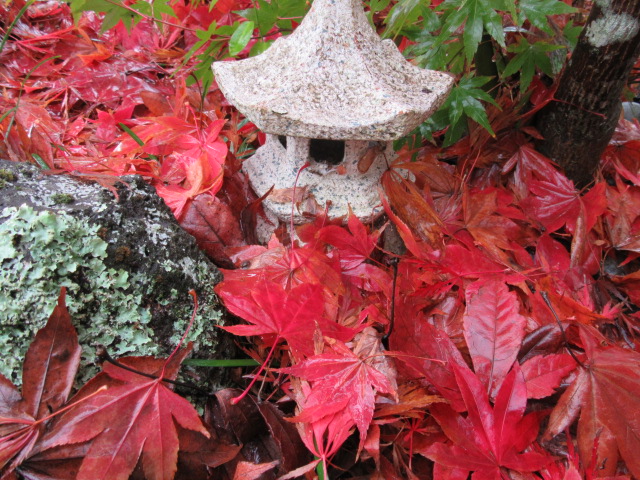 I went straight to the works of the greatest zen poet of all, Matsuo Basho (1644 - 1694) I never fail to be entranced by his succinct word pictures. Originally in training as a samurai, or warrior, Basho abandoned that life to travel around Japan and pursue the life of a wandering poet. His works are widely acclaimed throughout the world. This is his most well known Haiku:

An ancient pond
A frog jumps in
the splash of water


And here are a couple of his autumn themed poems:

An empty road
lonelier than abandonment
this autumn evening 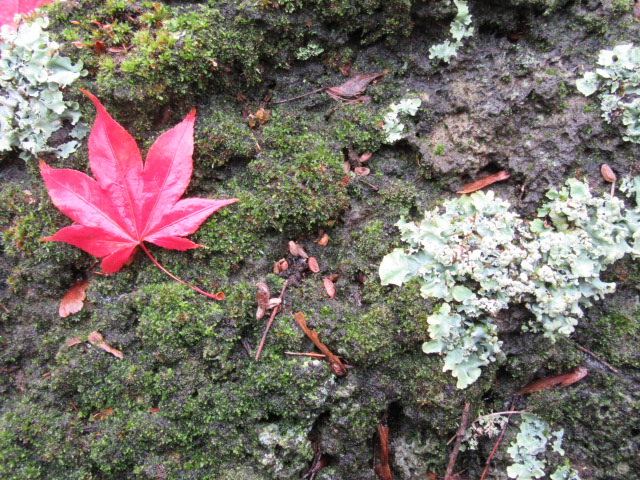 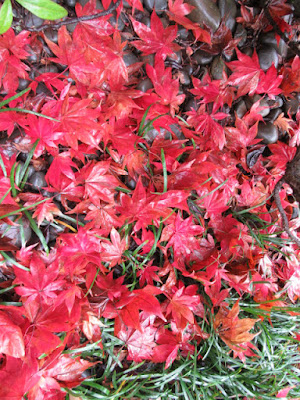 My legacy....
What will it be?
Flowers in spring
The cuckoo in summer
And the crimson maple of autumn

But since it really is winter I think I should add a couple of winter themed haiku.  These two are both by Basho: 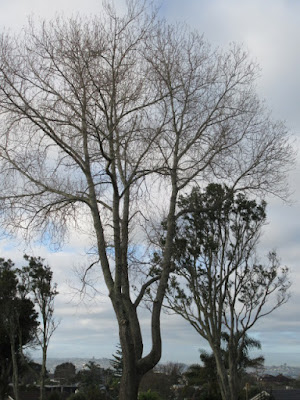 How admirable
to see lightening and not think
life is fleeting

Every season has it's pleasures and it's downsides, just like life.  The beauty of Haiku is the way it can combine the imagery of nature with the full range of human emotions. Occasionally I like to try my hand at writing them with varying degrees of success, however, I am fond of this one I wrote in memory of my late husband, a keen fisherman:

All photos are my own.
Posted by a wandering widow - solo travel at 19:46 No comments:

To most people the word 'villa' conjures up images of white washed or ochre coloured houses in the Mediterranean or around the Caribbean, not in New Zealand, though. Here the Villa is a very distinct and iconic style of architecture, with no resemblance to the villas of the northern hemisphere. 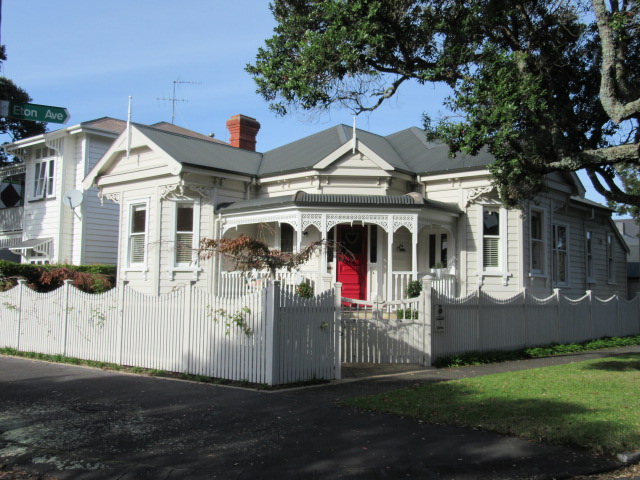 In the early days of settlement  New Zealand was a largely rural society with  most people living in small cottages. As cities grew and  suburbs developed, people became more affluent and looked for larger and more permanent homes, which the Villa provided. Drawing on Victorian influences the Villa was ornate and decorative having its heyday  between 1880 and up to the start of the first World War when austerity measures were adopted.Villas were built entirely of wood with  metal roofs, and often pre fabricated,  floor plans  were usually chosen from a catalogue. They featured high ceilings, sash windows and wide hallways and decorative features included stained glass windows, lacy fretwork and turned finials on the roof. 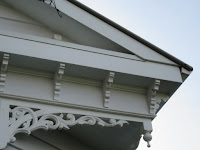 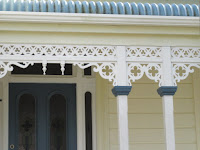 They were not built for the sun, with the master bedroom and little used, formal, parlour facing the road regardless, which, together with being  uninsulated, made Villas cold and draughty. Different cities in New Zealand had slightly different styles of villa, for example, in Auckland's warmer climate large wrap around verandahs were a feature, in Wellington Villas tended to be narrower and in Dunedin wrought iron was used as a decorative finish. They did not have running  hot water and in the early days, as was normal for the times, the toilet was a long drop in the garden.  Later the toilet was moved to the main house but was usually located at the end of a back verandah which meant going outside the house and along the verandah whatever the weather, an improvement on having  an outhouse in the garden, at least. 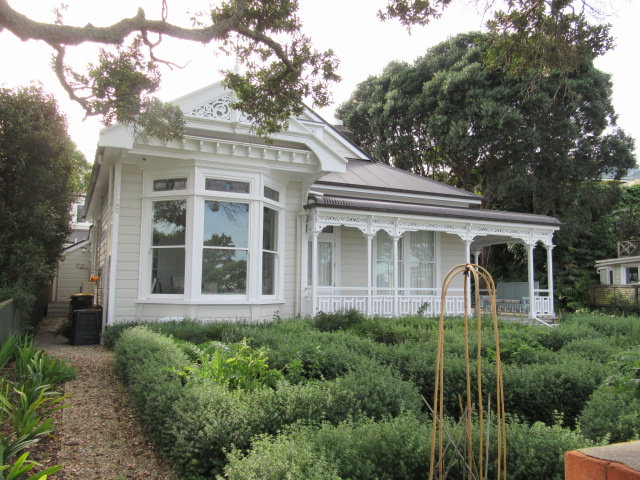 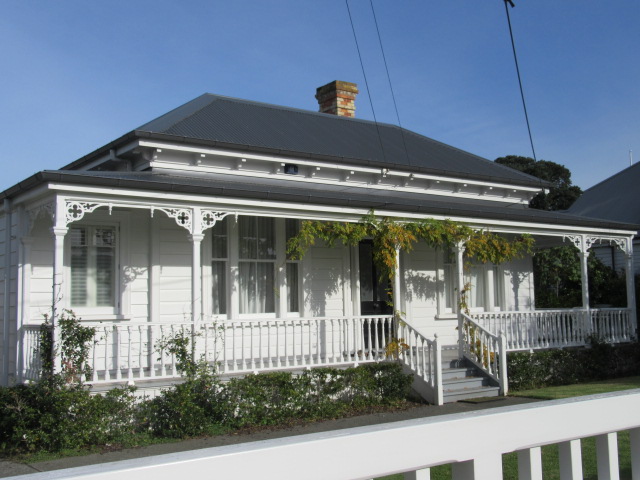 I have a particularly warm spot for the Villa, my grandparents lived in one and it is where my mother spent part of her childhood. Typically their Villa had a wide central hallway with the master bedroom one side of the front door and a small parlour, for entertaining guests, on the other side. This part of the hallway was separated from the rest of the house by dark red velvet curtains, no doubt to contain the warmth and prevent draughts.  Beside the master bedroom were two more bedrooms and beside the parlour was a large sitting room with a fireplace.  Next to the sitting room was a kitchen/dining room which was bright and sunny in the afternoon and next to the third bedroom was the bathroom.  The walls of the bathroom were vertical ship lap timber painted green and the bath was free standing and heated by a gas caliphont which gurgled and spluttered and frightened me as a child.  The sunniest rooms in the house were the bedrooms, bathroom and toilet. Also, typically, the toilet was along the outside verandah and the laundry was in a separate outhouse commonly known as the wash house.  There was no running hot water in the kitchen, hot water came from a wall mounted Zip heater, although in later years they did have a hot water system installed. Despite the slightly terrifying caliphont I have nothing but warm happy memories of this house.  My grandmother grew masses of daphne along the side path and I only have to get a slight sniff of daphne to be transported back there, full of happiness and nostalgia. 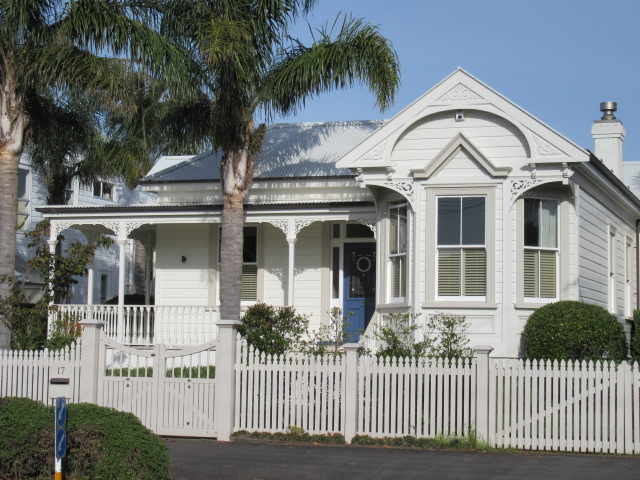 Today Villas are highly sought after although they need to be extensively altered to suit modern lifestyles. The key to a successful renovation is to retain the exterior (as seen in the photos above) while altering the layout inside.  Villas epitomise the romantic dream of a house a garden and a white picket fence.  At the time they were built cities were very small and villas were out in the new suburbs.  Today, as the cities have grown, those suburbs are mainly central city. Partly because of their central location and partly because they are a beloved style of architecture in New Zealand a well refurbished Villa is now very expensive.


Examples of Villas are spread throughout the inner suburbs of Auckland but some suburbs have more than others. Devonport and Cheltenham are two of the best but they can be found in numbers in Herne Bay, Ponsonby, Parnell, Remuera (where my grandparents lived) and Epsom.

All photos are my own

Posted by a wandering widow - solo travel at 17:23 No comments: