The ancient city of Perge and some friendly encounters

Around 17 km east of Antalya lies the ruined city of Perge and this was to be our first visit to an ancient Anatolian city.  On the bus trip there we joked amongst ourselves that we were "old ruins visiting old ruins" but with a rich history dating back to the 3rd century BC Perge wins...none of us will last that long!  Perge owed its importance to the river of Kestros which provided easy access to the city and rich alluvial soil for crops. At its height it was home to more than 30,000 but the river gradually silted up so people moved away and the city fell into decline.  It is known that St Paul visited Perge, sailing from Cyprus and coming right up the river into the city.  There are remnants of towers and walls built during the city's Hellenistic period ( 2nd and 3rd centuries BC) but the most stunningly beautiful period for the city was during the Roman Empire (2nd and 3rd centuries AD)

I never fail to be amazed by the sophistication and beauty of Roman cities.  Although now little more than crumbling ruins there is enough left  of Perge to imagine what it must have been like in all its glory.  This was the period when the theatre, stadium, bath houses, fountains and agora were constructed.  It was also a period marked by beautiful and elaborately carved,  marble
sarcophagi and a main street lined with marble pillars and many large statues. (We were to view many of the sarcophagi and statues from Perge later at the Antalya Museum).
﻿


I was impressed by the street washing system which consisted of a decorative channel of water running down the middle of the main street.  At certain points during the day hatches were opened in the sides of the channel to allow water to flow out and flush the street clean.  So simple, so attractive, so practical. And then there was the sophisticated heating and water recycling system at the bath house.  Those Romans sure knew a thing or two! Perge was a city dedicated to the cult of the Goddess Artemis.  It is known that a vast temple was built in her honour on a nearby hill but its ruins have never been found. Perge also had a Christian period in the 5th and 6th centuries AD when many churches were constructed.  The Hellenistic, Roman and Christian eras are known as Perge's "bright periods".  Interestingly Perge put up no resistance to the invasion of Alexander the Great  in 333BC and, indeed, welcomed him.  This was mainly due to the city's lack of fortifications leading the residents to believe it was better to befriend him than become embroiled in a futile battle.

Our visit to Perge was fascinating and enlightening but sometimes simple encounters with locals are just as memorable.  Earlier in the day our trip to Antalya took us up over the beautiful Taurus mountain range.  The scenery was stunning, how I imagine the Canadian Rockies to be.

﻿﻿﻿﻿
﻿﻿﻿﻿﻿
High in the mountains we met a mother her daughter and tiny grandson at a roadside fruit stall where we stopped to buy fruit.  They were warm lovely, friendly and full of smiles.  They spend all of every day, in the stifling heat, selling grapes, plums, pomegranates, figs, lemons, tomatoes and large jars of glorious amber coloured honey.We chatted, posed for photos, laughed, joked, admired their sleeping child and waved our farewells. 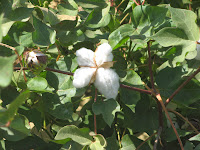 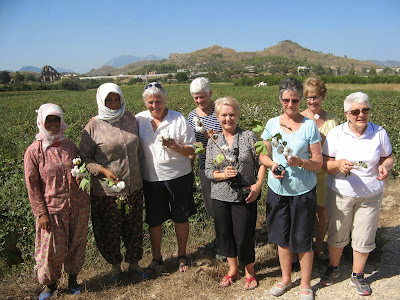 ﻿﻿
Later in the day, on the way to Perge, we came across fields of cotton with groups of women picking.  When we stopped to look they made their way across the field to present us with freshly picked branches.  This was fascinating for us having never seen raw cotton before.  They too were friendly, happy and smiling.  We found the Turkish people to be absolutely delightful and their open, friendly nature reminded us of our own fellow country men and women. 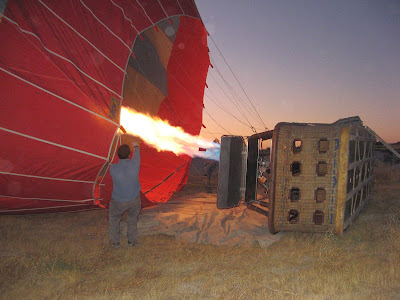 I hadn't planned to go ballooning in Cappadocia.  Yes, I knew it was the thing to do and that there were dozens of ballooning companies operating in the area and therein lies the rub, up to 100 balloons can be in the air on any given day. Too many opportunities for collisions, I thought, and with recent publicity about a balloon fatality in the area, and a nervous friend telling me how scared she was when she took a flight there, I have to admit I was not particularly enthusiastic. In the end, though, I thought "What the hell" and signed up for a flight, with the rest of my group and, boy, am I glad I did. It was just the most wonderful, memorable, once in a lifetime, experience and certainly a highlight of my 3 weeks in Turkey.

﻿﻿﻿﻿﻿﻿﻿﻿﻿﻿﻿
Ballooning always means a very early morning start so by 5am we were on the bus heading through the magical, surreal landscape, lights gleaming from the dwellings in the fairy chimney rock formations along the way.  We watched fascinated as our balloon was inflated with great bursts of gas and slowly rose up ready to fly.  Then it was all aboard ready for lift off.  Our balloon had a very large basket with four compartments each holding four people and with a central area for the pilot and the enormous gas bottles.  Take off happened almost imperceptibly as we rose slowly and silently into the air with just the occasional woosh when the pilot turned the gas jets on to keep the balloon inflated.﻿﻿﻿﻿﻿﻿ 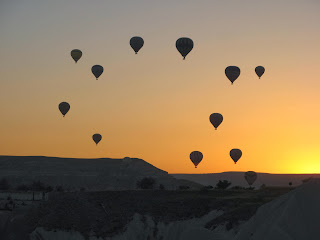 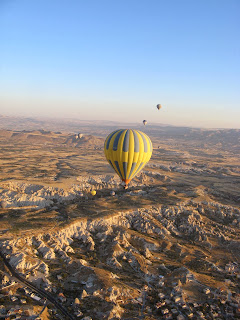 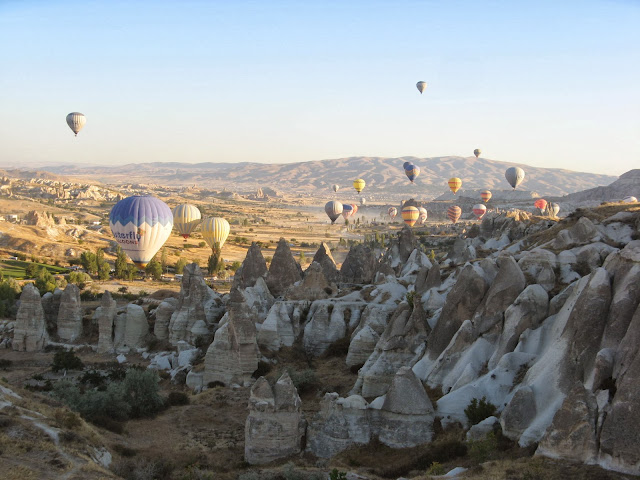 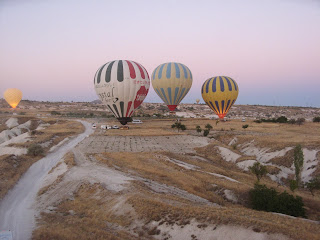 It was stunning floating over the amazing landscape, watching the sun rise, admiring the other 83 balloons which were up that day. Mustafa, our pilot, was excellent, he kept his distance from the other balloons and lowered us right down into the Pigeon Valley and then raised the balloon again to float over the town of Goreme. There was no feeling of fear, just absolute enchantment and our one hour flight passed all too quickly.

﻿  Ballooning is a big money spinner for Cappadocia and there are dozens of ballooning companies.
Some are better than others so if you are planning to go ballooning, do your research. The company we flew with was Kapadokya Balloons and they run a very slick and professional operation. Some of the pilots are so skilled they even land the balloons right on the back of the trailer that transports them. Our pilot didn't because he was taking a second group up after us but I would suggest you make sure you are on an early flight, if possible, because watching the sun rise over the landscape is stunning. When we landed we were all thrilled, excited, relieved and fizzing as much as the sparkling wine waiting to greet us. I don't think I will ever do another balloon flight. I can't imagine any flight being as good as this one was nor any landscape quite so magical. A balloon flight over Cappadocia gets a big fat tick on my bucket list! 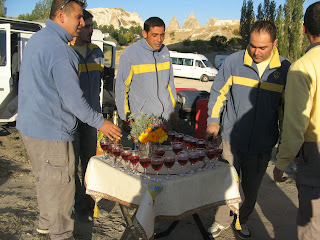