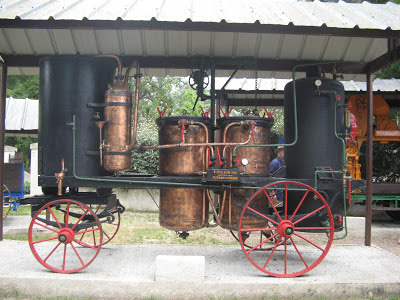 The great thing about travelling with a group of people with varied interests is that sometimes you go to places you wouldn't normally think of going to on your own and you end up finding them fascinating.  For me, this was the case when one day four of us decided to visit the Musee  Maurice Dufresne, a short distance from Azay-le-Rideau in the Loire district of France. 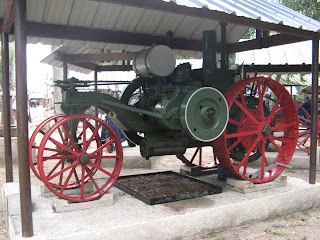 Maurice was born in 1930 and trained as a blacksmith. Eventually he built up his own very successful business in scrap metal dealing.  He noticed that a lot of old machinery was being tossed out for scrap once new technology was developed and it was from there that his passion to save old machinery, for posterity, grew.  He became an avid collector of all things mechanical, and much more besides, to the extent that his collection grew so vast he eventually bought an old, disused, paper mill to house it.  Today the collection consists of over 3000 items including Bleriot's plane used for his Channel crossing in July 1909. There are also between 500 and 600 period vehicles of all types,  pedal cars, washing machines, early bicycles, weapons, advertising posters, even an entire silk mill which he bought lock, stock and barrel and transported back to the museum. The centrepiece of the museum is the Fontaine water turbine, which was restored by Maurice and is fully working. 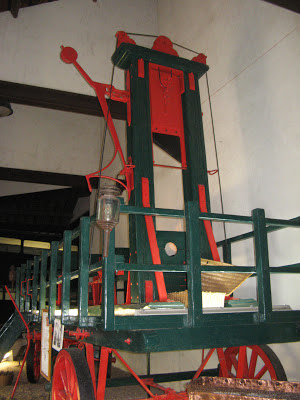 For those with a love of the macabre there is even a genuine French guillotine, said to have loped off more than 100 heads (pictured right)  and a rather creepy collection of wax heads of condemned people.

Maurice died in 2008 but his legacy continues under the management of his daughter, Monique.  The museum is a popular place, visited by thousands every year  but the day we visited there was only a handful of people there and we were able to take a leisurely stroll around the exhibits.  The museum is so vast, though, I don't think a crowd would be a problem.


We wandered through the galleries for a whole afternoon...there was so much to take in, almost too much, and my mind turned continually to my late husband and son, both motor enthusiasts and lovers of machinery who would have been thrilled by it.  I would suggest a visit here would be a great antidote if you are all "Loire chateaued out". It is a gem of a place in a tranquil setting by the river and includes a bar and restaurant for refreshments and a gift shop for souvenirs. 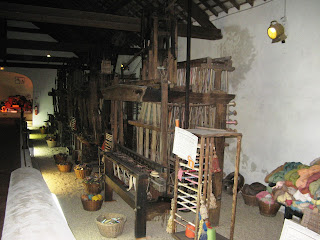 Right: A complete silk mill which Maurice bought and set up in the museum,  It is exactly as it would have been, right down to the supervisor's desk and work books and the clock for staff to clock in and out on.


Below:  This is a travelling pedlar's cart, dating from the time of the French Revolution. 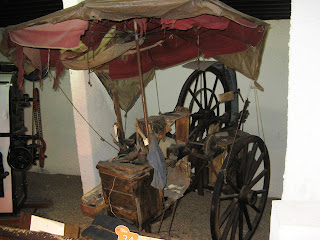 www.musee-dufresne.com
Posted by a wandering widow - solo travel at 19:07 No comments:


Cave dwellers, known as troglodytes, have made their homes in the soft tufa or limestone cliffs along the Loire since medieval times.  Because the stone was easy to carve and maintained a constant year round temperature of around 12 degrees villagers were able to create simple, secure houses, largely protected from the elements. The idea of cave dwellers is fascinating and we were keen to explore at least one troglodyte village so, one morning, a few of us set off from Prieure de Relay for Des Goupillieres, a few kilometres out of the village of Azay-le-Rideau, tucked away up a small country lane and easy to miss if you don't know it's there. While many of the Loire  troglodyte settlements have now been turned into smart holiday accommodation, or private holiday homes, this village has been restored by its owners to as near authentic a medieval troglodyte village as possible. 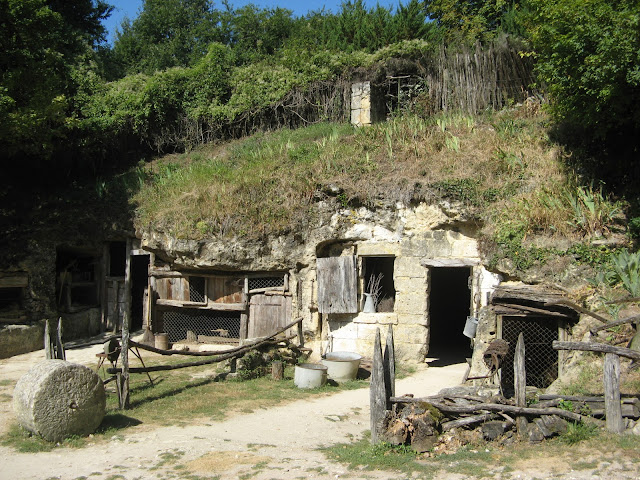 The village was discovered by Louis-Marie Chardon who, as a boy, enjoyed roaming and exploring his father's orchard. It had been inhabited until around 1900 but by the time his father bought the land it was overgrown with trees and brambles.  Louis-Marie eventually inherited the property and started to restore it and today the village is laid out as a medieval farming village complete with various farm animals, orchards and vegetable gardens.  Unlike some of the other troglodyte villages it is not prettified, gardens are surrounded with rustic fences cut from branches and the animals are kept in various pens, just as they would have been when the village was a bustling subsistence community. 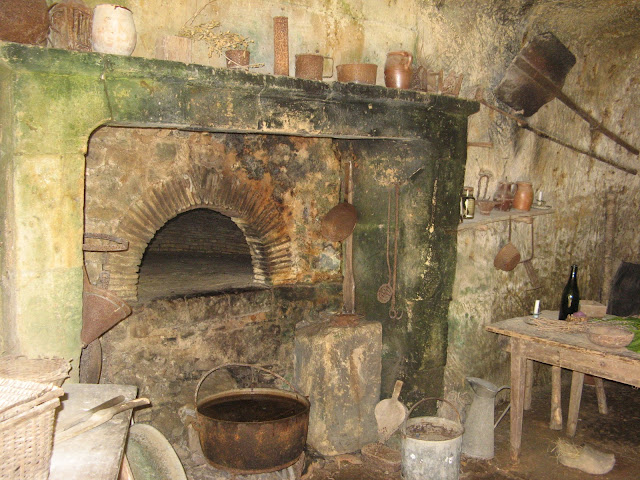 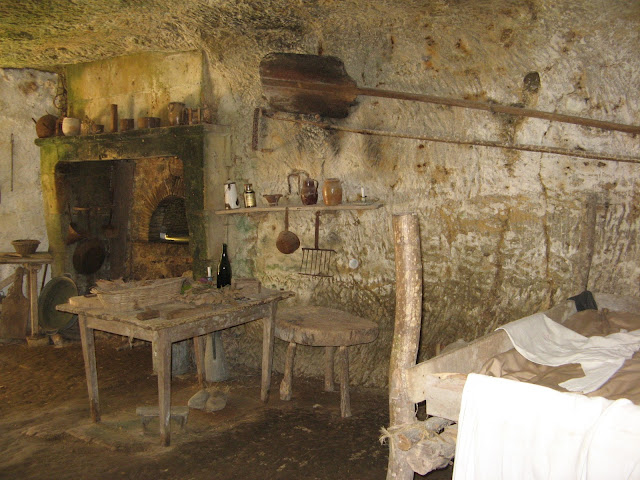 We were surprised by the houses.  I imagined cave like structures but the rooms are, in fact, squared off as a regular room would be and have sophisticated built in ovens.  Most houses have an adjoining room, open to the living area, where their horse or donkey was kept.  Not only was this, their most valuable possession, kept safe and dry but the animal also helped keep the house warm. There is even an underground refuge accessed by a narrow tunnel, which none of us were game to enter, where the villagers hid from marauding enemies and robbers. 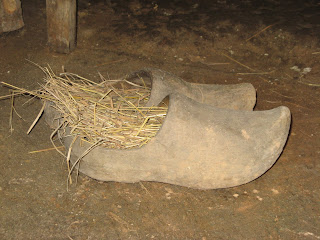 I really enjoyed strolling around this village.  I could imagine life as it was so long ago, could almost see the villagers scurrying about their business, gardening, baking, caring for the animals. It must have been a tough existence but the morning we were there it was quiet and peaceful, the only sound birds chirping in the trees.  Oh, and the fact that the people must have been very short, judging by the door and ceiling heights, made me feel right at home! 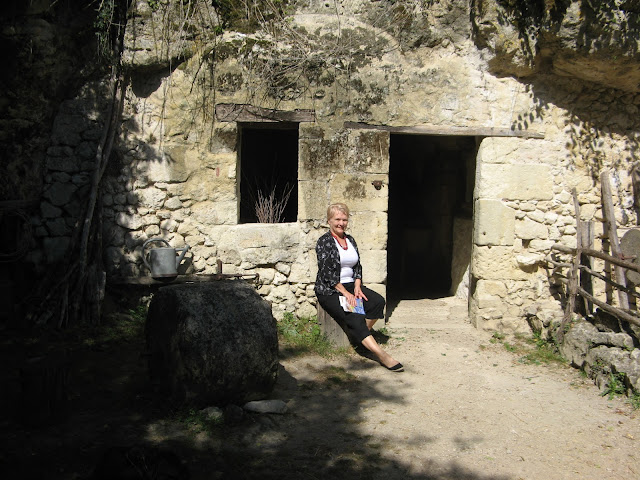 Posted by a wandering widow - solo travel at 12:38 No comments:


All too soon our short stay in Paris came to an end and we were off on the train to Tours to meet up with a large group of friends, and friends of friends, we were joining for our three week holiday in France.

All went well...that is if you don't count nearly forgetting to get off at the right station then scrambling to get off in time, finding the rental car company we had booked a car from closed, getting lost trying to find our accommodation, which wasn't recognised on the GPS, and spending an hour waiting for help in the blazing sun...yes, apart from that all went well!  Oh, and I won't mention that the nameless driver of our rental car seemed to be very drawn to curbs along the way!

After being rescued by some friends, who had already booked into the accommodation, we found we had been searching in the wrong direction and, to be fair to ourselves, the owners do not widely advertise their location because they get as many bookings as they can comfortably cope with without needing to. 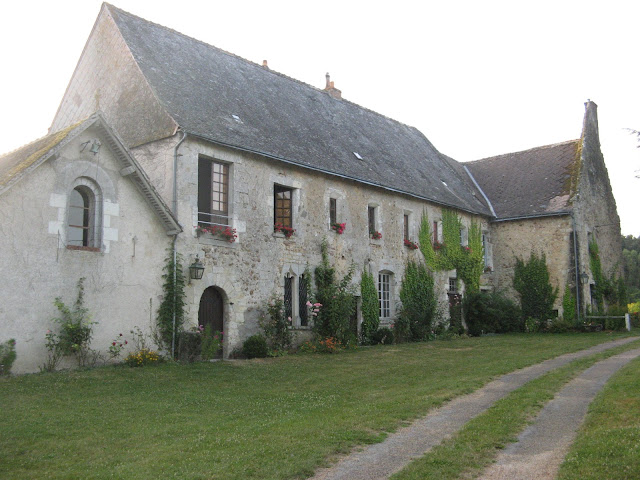 The delays were soon forgotten, though.  We were thrilled when we finally saw the  Prieure  de Relay, a 12th century priory with a colourful and fascinating history.  Founded in around 1108 for Benedictine nuns it was visited by various kings of France from Charlemagne to Louis XIV.  Joan of Arc also called in for refreshments as she treked across France.  The pathway she led her troops along runs right beside the priory grounds and is still used as a horse treking trail.  The buildings were ransacked by the French revolutionaries and  occupied by the Nazis during the second world war.  There are bullet marks in the exterior walls where the Germans held rifle practice.  Today it is is a serene, tranquil place, in the private hands of a French couple who have fully refurbished the interior and rent most of the property out as holiday accommodation....and it is beautiful. 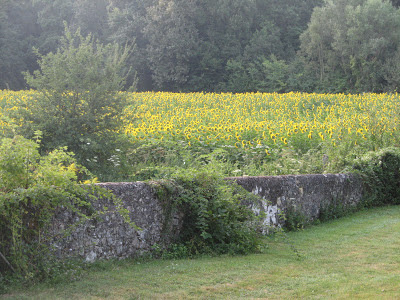 We were delighted when we drove through the stone gate to see the ancient buildings looking picture perfect in the afternoon sun.  With geraniums spilling from window boxes, roses climbing  up the walls and shutters framing the windows it is a photographers delight.  It is located in the forest of Villandry, the nearest village, Sache, the home of the famous 19th century writer, Balzac, is 3kms away. The property has 30 acres of land including several fields of sunflowers which were at their best during our stay, their smiling golden faces paying daily homage to the morning sun. 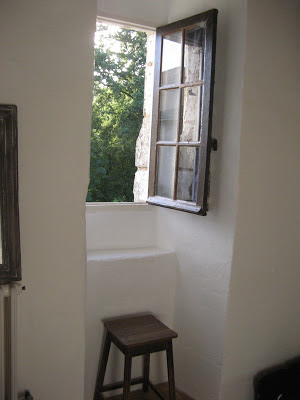 Our group had the priory to itself.  The accommodation included the main priory building, where I was, together with half our group of twenty, and an adjoining farmhouse where the other half stayed.  I was allocated the smallest and plainest room and I couldn't have been happier. It was an original nun's cell, simply furnished with a view over the gardens and away from the blazing afternoon sun.  At night I slept with the curtains open enjoying a million sparkling stars and the occasional aeroplane in the distance, the only sound the occasional hooting owl.  It was so peaceful. 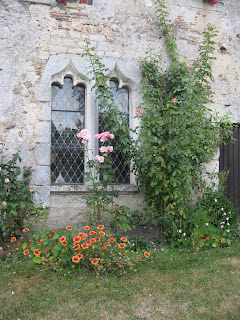 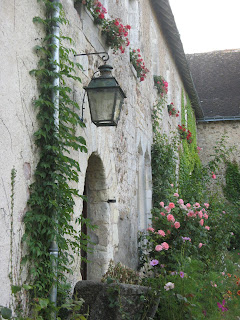 It was a great pleasure to stroll and explore the grounds at the end of each day. The remnants of the large vegetable gardens and orchard are still visible.  The chapel is surprisingly intact although the Germans built a wall through the middle of it to use it for storage.  It is a lovely chapel and still used on occasion.  Joan of Arc is celebrated in a modern stained glass window (picture below).  There are caves which were used for storing food and wine and for hiding from enemies (now gated off for safety purposes) and a large dove cote which has been largely restored. We had a blissful week at this divine location, relaxing, reading, chatting, making occasional forays to the nearby village of Azay le Rideau and sightseeing.  Evenings were spent enjoying long lazy meals under the stars by the priory's atmospheric stone walls.  It was extremely hot - in the high 30s and even up to 40 degrees which, thankfully, ensured that the nine children under nine in our group spent most of the days at the swimming pool, with their parents, some distance from the main building and us! 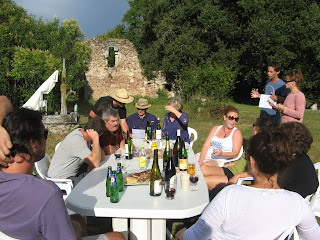 
Posted by a wandering widow - solo travel at 18:39 No comments: