Kidnapped in Istanbul? And the Grand Bazaar 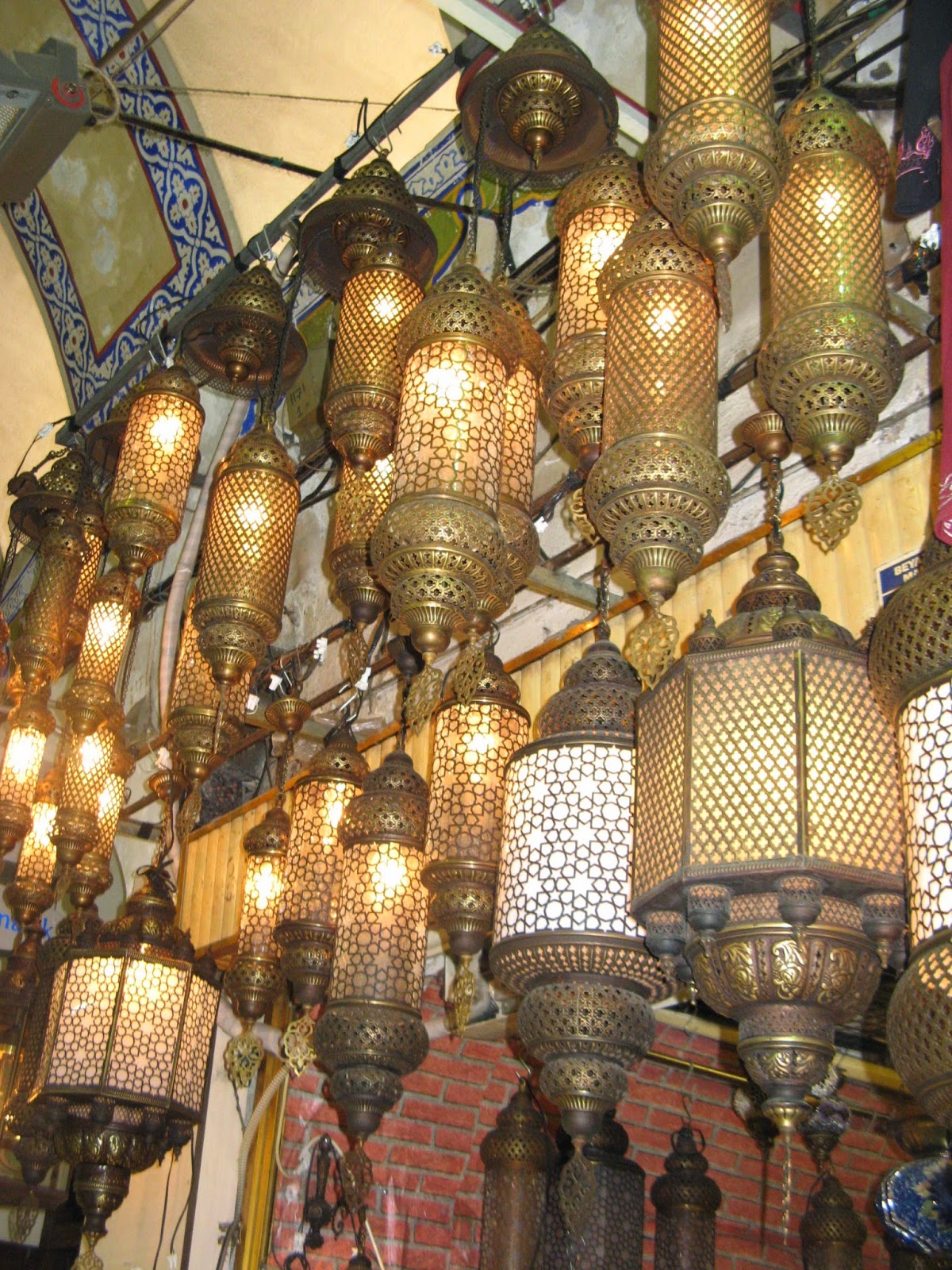 Kidnapped?  No not really but it seemed that way for a while. It had been a long trip from Cannukale back to Istanbul and as  we approached this mega city of some 15 million people  we noticed that our driver was becoming increasingly tense.  It wasn't long before he was asking directions from cars parked beside us at the traffic  lights or shouting requests for help at pedestrians. He was hopelessly lost.  Our driver, Eko, comes from a small town and despite the fact that he had been to Istanbul many times he still felt intimidated by it.  Mind you, who wouldn't? The rush hour traffic jam started 20 kilometres from the middle of town and had to be seen to be believed...cars everywhere, drivers ignoring traffic signals, in general, road mayhem.

When we finally made it to Sultanhamet, Istanbul's old town, we became entrapped in the one way road system and could not get to our hotel.  We drove around in circles for a while until a man Eko had asked for directions agreed to get in our van and direct us.  This had happened a couple of times during our travels.  The Turkish like to be helpful. Having been within a couple of hundred metres of our hotel we now set off on a long journey in the opposite direction.  As we drove further and further away everyone in the van fell silent and I passed a note to our tour guide asking if we were being kidnapped. But, of course, I was only joking. Our good Samaritan rang his wife to tell her he was in a van full of women and would be late home. I've no idea what his wife made of that but he delighted in telling her.  I think he was quite proud of himself. I knew we were safe with this kindly man but it sure was a long trip to get where we were going.  About 40 minutes later we finally arrived at our hotel.    Anyway with laughter and smiles and big thanks all round he at last set off home for his dinner and, no doubt, lots of questions from his wife!

The next day, our last full day in Turkey, we went to the Grand Bazaar.  It wasn't at all
as I imagined it to be.   I had pictured dark, crowded alley ways teeming with pushy vendors and pick pockets.  The Grand Bazaar is quite the opposite.  Covering 30 hectares with 61 interconnected streets and 3000 shops it would be quite easy to spend a whole day there....and get lost! The 550 year old bazaar provides work for 26,000 people in  light, airy covered streets boasting magnificent architecture and wide walkways. It is a shoppers dream with stalls selling everything Turkish - lanterns, scarves, tiles, jewellery, soft furnishings, clothes, shoes - you name it.    We shopped  and drank coffee and people watched to our hearts content.
﻿

That evening, for our final night in Turkey, we dined at a restaurant over looking the illuminated Blue Mosque and Haghia Sophia.  It was a perfect night in an utterly romantic setting.  As the calls to prayer rang out from the several mosques in the area we felt sad to be leaving this wonderful country and its people.  Our trip had been crammed with history, spectacular and varied scenery, cultural experiences, kindness, delicious food, adventures and great companionship.  It was everything you could want from a trip and more.


Here are a few things I learnt in Turkey:
1. Turks rarely, almost never, drink Apple Tea.  It is for tourists. Strong black tea drunk by the gallon is their drink of choice
2. Although most Turks are, at least nominally, Muslim, many of them drink alcohol
3. The countryside looks barren and arid but is amazingly fertile
4. The Turks are obsessed with cats.  They are everywhere but are always well cared for.
5. The Turkish people are kind, friendly, good company and love New Zealanders.
6. Their plumbing is not great and most hotels are quite basic
7. Turkish food is delicious
8. The very few beggars are, in the main, gypsies
9. Turkish lamps are absolutely desirable
10. It is a vast country with a wide variety of things to see and do.  If you ever get the chance - go there!
Posted by a wandering widow - solo travel at 13:48 No comments:

The sun glittered on a smooth sea during the short ferry trip from Cannukale to the Gallipoli peninsula but despite the glorious day we were in a somewhat sombre mood. This was a pilgrimage, of sorts,  to a battlefield which saw the loss of life of 2779 New Zealanders.


We were fortunate to have Muhammad, a Turkish historian, as our guide for the day. He gave us a very full account of the campaign.  This was very sobering and somewhat embarrassing. Sobering, to consider the pointless loss of life of 44,000 British and their allies and 87,000 Ottomans (Turkish) and embarrassing to think that the British and their allies attacked the Ottomans on their own soil. I am not qualified to give an in depth analysis of what happened there, however, there have been many, many books written by historians which recount the lead up to and reasons for the attack on Gallipoli.


At the time New Zealand was still a young country very much tied to Britain.  New Zealanders took pride in supporting the British Empire and were proud of the courage of their men who endured shocking conditions in the trenches in what proved to be a lengthy campaign. New Zealand and Australian forces (Anzacs) landed, in an extremely ill fated manoeuvre, on Gallipoli on 25 April 1915.  Anzac Day was established as a national holiday in New Zealand to remember the fallen, commemorate this campaign and also give thanks to those who have given service to New Zealand in both war and peace since.  One of my great uncles fought in the Gallipoli campaign but, fortunately, survived.  The bugle he carried throughout his war years is now on display at a museum in Rotorua, New Zealand. Gallipoli has become somewhat mythologised in the New Zealand psyche and is claimed as the birth of our independent nation.  This is not entirely true and is more an example of placing modern day values on something that happened 100 years ago.


Anzac Cove, the site of the notorious landings is today a small, peaceful bay and, on this day, was overlooking a calm, blue sea.  It was so hard to imagine the horrors of the landings when the sea was said to be red with blood and thick with the bodies of soldiers who had drowned under the heavy weight of their packs and weapons.  We felt incredibly moved by the enormity of what had happened there.

Most of us shed a tear as we read Ataturk's quoted inscription on the Anzac memorial and lay sprigs of rosemary, for remembrance, at it's base.  Walking around a New Zealand cemetery we were shocked to see that some New Zealanders lost their lives at only 16 years of age.   We later visited the Australian cemetery at Lone Pine.  The youngest Australian casualty was even younger at 14. They were just boys.

"Those heroes that shed their blood and lost their lives
You are now lying in the soil of a friendly country. Therefore rest in peace.
There is no difference between the Johnnies and the Mehmets to us
where they lie side by side here in this country of ours.
You the mothers who sent their sons from far away countries, wipe away your tears;
Your sons are now lying in our bosom and are in peace.
After having lost their lives on this land they have become our sons as well."
Ataturk 1934

﻿﻿
For the Anzacs the Gallipoli campaign was a young man's war - teenagers and 20 year olds  looking for adventure - but for the Turks, men of all ages and walks of life fought resulting in a devastating loss to the country of well educated professionals.