It was a bit of a family ritual at our place on wintery evenings in the 1990's....soup and toast in front of the television while we watched Steve Irwin,  the Crocodile Hunter, throw himself on to the back of crocodiles or wrangle highly venomous snakes.  Steve was a true wildlife warrior and a real Aussie character.  He had been brought up in a wild life park, and had an irrepressible and boyish enthusiasm for wildlife, particularly snakes and crocodiles. Apparently his parents gave him a four metre scrub python for his 6th birthday present and he was thrilled. His delight as he held up a writhing poisonous snake, grinning at the camera and declaring "Isn't it beautiful" would send shivers down our spines, especially for us New Zealanders who are blessed to live in one of only two countries in the world free of snakes.  His other famous catch cry when he was startled by a large croc or bitten by a snake, which he was several times, was a chirpy "Crikey". Many of us thought he would lose his life to a snake or a croc one day but it was a tragic and bizarre accident that took his life at the tender age of 44 in 2006.  While filming for a series on marine life he snorkelled above a sting ray which flicked its barbed tale and pierced him through the heart. He was killed instantly leaving behind his wife, Terri and two young children, Bindi and Robert.  Fortunately Steve left behind a wonderful legacy, Australia Zoo in Queensland, Australia.  Originally the wild life park owned by his parents, Steve and Terri, gradually developed it and grew it bit by bit using it as an income stream to develop their many conservation projects.  The zoo is now run by Terri and staff.


﻿
I had always wanted to visit Australia Zoo and on my recent visit to Queensland with my son and his family I finally got the opportunity. It is a wonderful place, not like any zoo I have ever visited before.  The thing that struck me most was how beautiful it is.  It is over 100 acres in area and is like a huge garden with beautiful native trees and bushed areas and animals in compounds along the way. The animals are primarily Australian and I was delighted to see some animals I had never seen before such as the Komodo Dragon, Tasmanian Devils and  Wombats.﻿﻿

There is a strong focus on crocodiles, understandably as capturing them for conservation purposes is what Steve was known for.  At the heart of the zoo there is a large stadium called the Crocoseum where crocodile shows are put on daily.  We were a little startled to see staff holding snakes and baby crocs, for the public to pose with, as we walked through the gates, however, the zoo is as "hands on" as possible to encourage people to respect and care for wild life.  We stroked the snake, which was surprisingly warm.  The zoo keeper told me they are kept under heat lamps to keep them calm before handling.  Not for me, though, to have my photo taken with it wrapped around my neck! We held the crocodile too all of us feeling incredibly brave.  It was only a baby, about a metre long...but still!  We gasped with horrified fascination at the snakes in the snake enclosure, Australia has some of the most dangerous, venomous snakes in the world, and we prayed that none of them got loose while we were there. 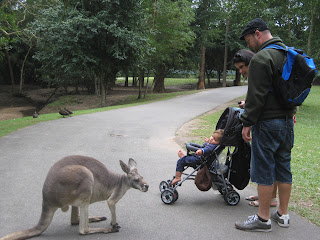 We enjoyed looking at the adorable, cuddly, sleepy, koalas and strolled amongst the kangaroos in a large kangaroo garden.  A walk past the Elephants and Tigers  brought us to an area still under development called Africa.  There we saw Cheetahs  Zebras and a rhinoceros and the plan is to make this a large savannah-like area as per an African wild life park.  The zoo has many eating places and shops providing everything you could want for a good family day out. 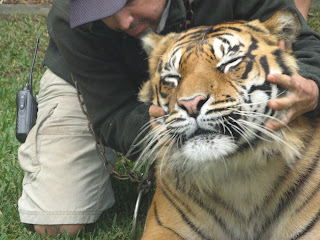 I would highly recommend a visit to Australia Zoo.  It is a place I would happily return to any time.