Recently I was invited to stay for the weekend with my good friends at their home in Whangamata and as luck would have it it was the weekend of the Repco Beach Hop. I had heard of the Beach Hop but had never attended it so was really looking forward to seeing what all the excitement was about. I had no idea what a fun weekend it would be. 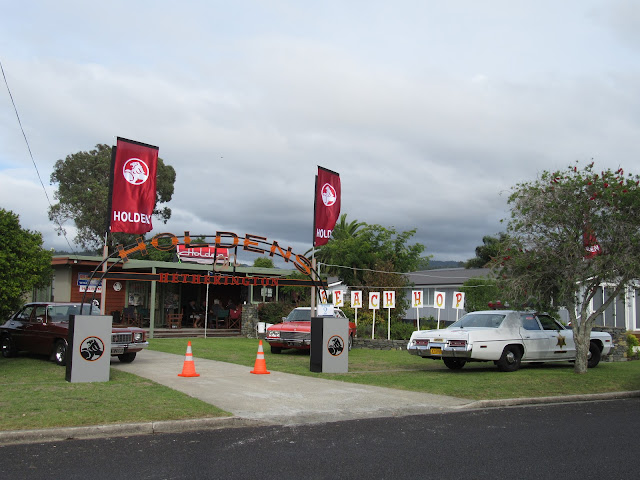 The Beach Hop began as a one day event in 2001 drawing a crowd of 6000. It has grown and developed over the years into a major five day festival of classic vehicles and rock and roll now attracting over 110,000 visitors.  It is such an outstanding event that it won the award as the best New Zealand event of 2017 at the National Events Awards Show, not surprising judging by the numbers it attracts to this small seaside town on the Coromandel Peninsula, around 2 and a half hours to the south east of Auckland with a population of under 4000. Now entrants come from as far away as the United States and Australia to show off their vehicles and enjoy the camaraderie of like minded enthusiasts. 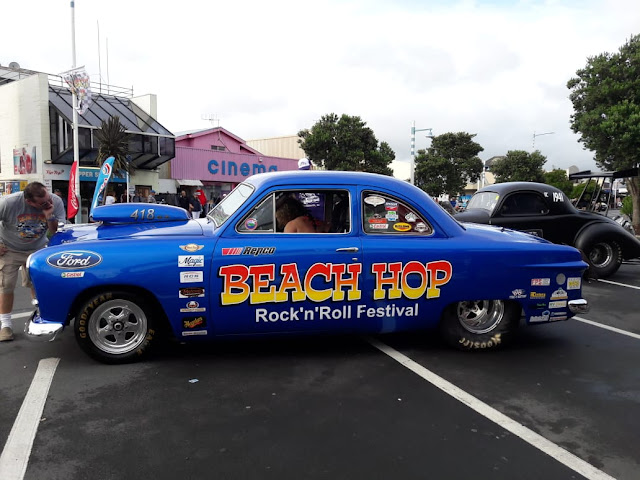 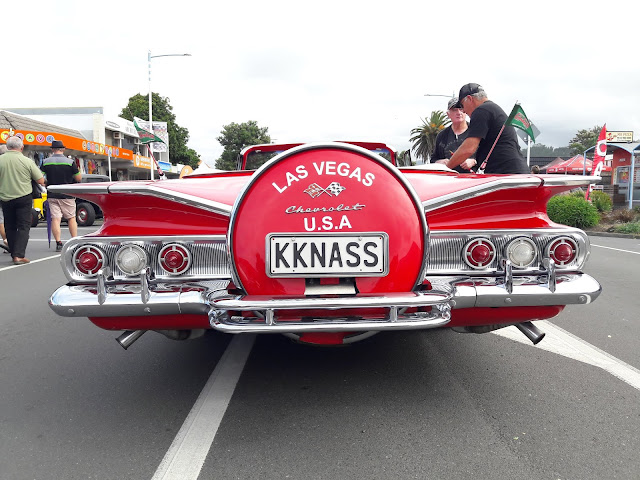 Classic cars and rock and roll make for an intoxicating mix of all the good things about the 1950s and 1960s.  The Beach Hop is a celebration of the classic cars, motor bikes, dragsters, scooters, vintage caravans, hot rods and the culture, music and fashion of that golden era. The programme includes rallies to other beaches,  judging of vehicles in their various categories, a Pin Up contest, rock and roll performances, a swap meet and market and, the absolute highlight, the grand parade with 1000 vehicles taking part. Fortune smiled on the event this year and although the weather was patchy it never rained when it mattered so all events went ahead as planned. 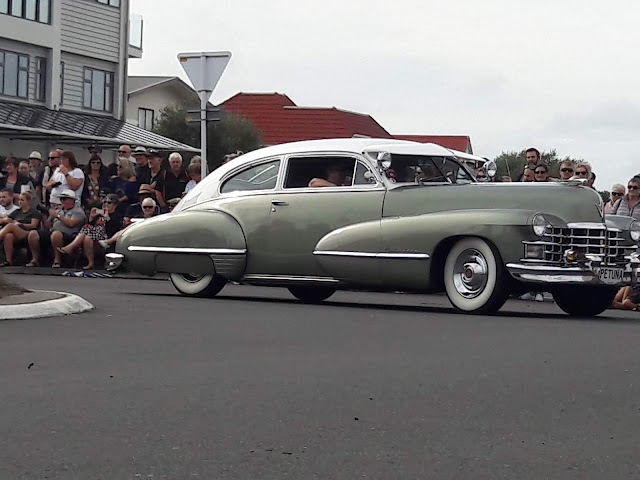 I can't tell you how much I enjoyed the weekend.  Although I am not what you might call a car enthusiast I do appreciate the beauty of these vehicles and the time, skill and commitment that has gone into restoring and caring for them.  I know that my late husband would have been in car lovers heaven, if he'd been there, as a car enthusiast himself. 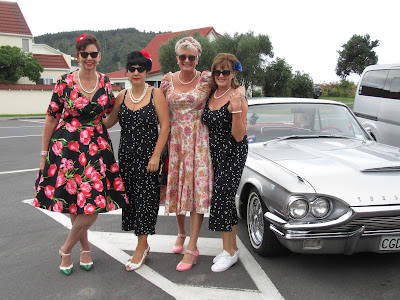 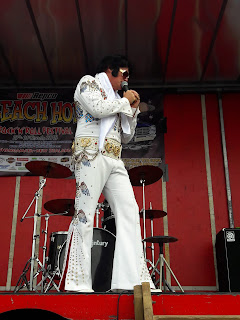 It was a pleasure to walk around town soaking up the friendly atmosphere, looking at the cars, admiring the women dressed in their very best rock and roll finery, (and there is no doubt women's style of the era was the most feminine and pretty in recent memory),  listen to a bit of rock and roll  and especially to watch the gob smacking grand parade. In the evening we dined at the Ocean Beach club where we were entertained by a band in Hawaiian shirts playing all the surfing classics.


Sunday morning saw us at the local Baptist Church for their now famous rock and roll service where the seats are cleared from the centre of the church and attendees are invited to get up and rock and roll. Many rock and roll clubs from around New Zealand come to the Beach Hop and it was fun to watch them doing their thing. ( play the video below for a taste of the rock and roll service)

For me one of the best things about the event was the positivity of everyone around town, how well behaved and pleasant everybody was, even the police remarked on what a great 5 days it had been. The crowd was mostly made up of families all out together having fun. I loved the friendliness of everybody and the love and enthusiasm the vehicle owners had for their cars and their hobbies. The Beach Hop is a great bonus for the local shopkeepers of this summer resort who find business slow and quiet during the winter months. It is estimated the Beach Hop brings around $7 million into the local economy. It is also a great boost to local community services such as surf life saving and the volunteer coastguard who have benefited by more than $500,000 over the years from the money raised. 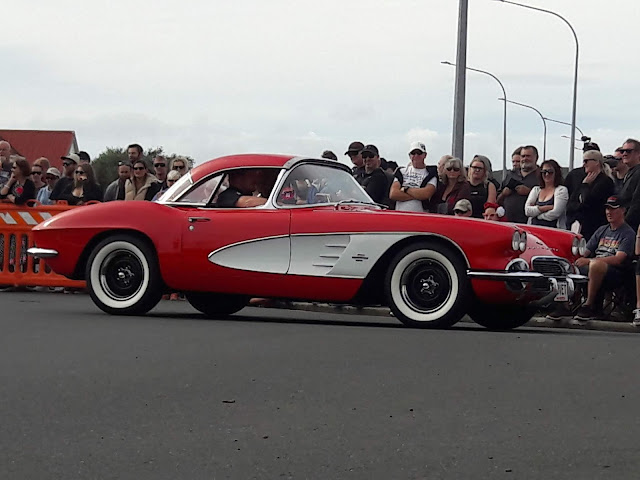 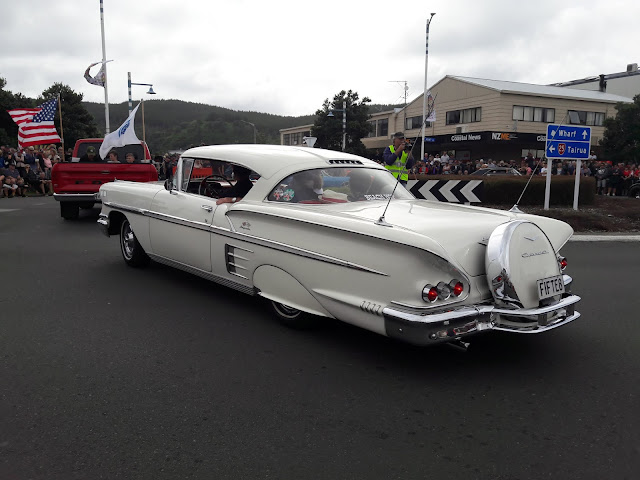 If you haven't been to the Repco Beach Hop at Whangamata I suggest you go, even if you are not a crazy car buff. Drag out your blue suede shoes or your stiffened petticoat and get right into the spirit of this great event. I guarantee you will enjoy it as much as I did.  You'd better get in quickly, though, I believe a lot of accommodation is booked out a year in advance.  A big thank you to my friends, Diana and Ian, for hosting me for the weekend.
Posted by a wandering widow - solo travel at 17:02 3 comments: