Malmo, Sweden - a good day out

Coming, as I do, from New Zealand, a small country at the bottom of the world and at least a two hour flight across the sea to any other country, it is always a thrill for me to travel from one country to another on land.  It never ceases to amaze me how the simple act of crossing a border can take you into an entirely different world with a new culture, language, food and architecture.  Since I was spending a few days in Copenhagen with my son and his family, the chance to travel into Sweden for a day was too good an opportunity to miss.  Denmark and Sweden have forever gazed across the sea at each other, (Malmo was originally part of Denmark but was ceded to Sweden in 1658) however they are now, at last, joined by the magnificent dual road/train Oresund bridge, all 16 kilometres of it, which includes a tunnel for part of the way.

Opened in the year 2000 the 20 minute trip across the bridge has made it possible for people to live in one country and work in the other and for tourists like us to enjoy  a train trip across the sea. Malmo is Sweden's third largest city.  It was heavily industrialised until the 1990s when it was hit by the Swedish financial crisis resulting in the closure of many industries and the loss of 27,000 jobs. Fortunately the new Malmo university campus on the river's edge and a burgeoning IT industry are slowly bringing vibrancy and life back into the city.


Our first stop in Malmo was at the canal cruising depot where we booked a tour around the city and harbour.  It was my idea to take the cruise thinking it would give us a good overview of the city before exploring by foot, but within a few minutes of the cruise starting I began to feel I had made a mistake.  The cruise headed out into the harbour past the usual ugly, port, industrial buildings, some in a seriously derelict state.  Nevertheless, there were a couple of things  to see, worthy of note, firstly the attractive light house at the entry to the harbour and secondly the amazing "turning torso" building, Scandinavia's tallest skyscraper, a spectacular feat of engineering and the pride of Malmo.


I was relieved when the boat made its way back to the canal running through the city to show us Malmo's  pretty side.  We passed attractive tall, old mansions and townhouses lining the canal and the large leafy Kings Park  with sculptures nestling amongst the trees.

We cooed with delight at the sight of a traditional Swedish windmill on the river bank and my four month old grand daughter kept us entertained with her very own commentary of gurgles and chuckles.


Next we walked up through the town.  The pedestrianized main streets and squares
were very busy, there appeared to be a festival on, so the city was colourful and lively.  The architecture was subtly different from the Danish and we noted plenty of good shops, various artisan galleries and, of course, we just had to spend time in Marimekko, the famous Finnish fabric design store.

Things we noticed as significantly different from Copenhagen were the more ethnically diverse population, the littered streets and the large number of beggars about.  From what I have read unemployment is still very high and there are quite clear social divisions. Although I understand Malmo is still suffering from the down turn of the 1990s I do not know enough about the economies or immigration policies of Denmark and Sweden to comment on these startling differences which were quite obvious to us.


After wandering the city for a while we headed back to the railway station to enjoy a late lunch at a very attractive café  before catching the train back to Copenhagen.  Wishing to use the toilets I looked around the station for some time before finding one, only to find that it was pay to use and we had no Swedish currency.  Oh dear, just had to wait until on the train.

﻿﻿﻿﻿﻿
﻿﻿﻿﻿﻿
﻿﻿
Just as an aside, there is a trend in the UK at the moment to show Swedish crime thriller series on TV which have attracted a cult following and even a craze for wearing Nordic style jumpers.  My daughter in law had watched the series The Bridge, set on Oresund bridge and had enjoyed it so she was doubly pleased to cross "The Bridge"
﻿﻿﻿﻿﻿

Posted by a wandering widow - solo travel at 19:00 No comments: 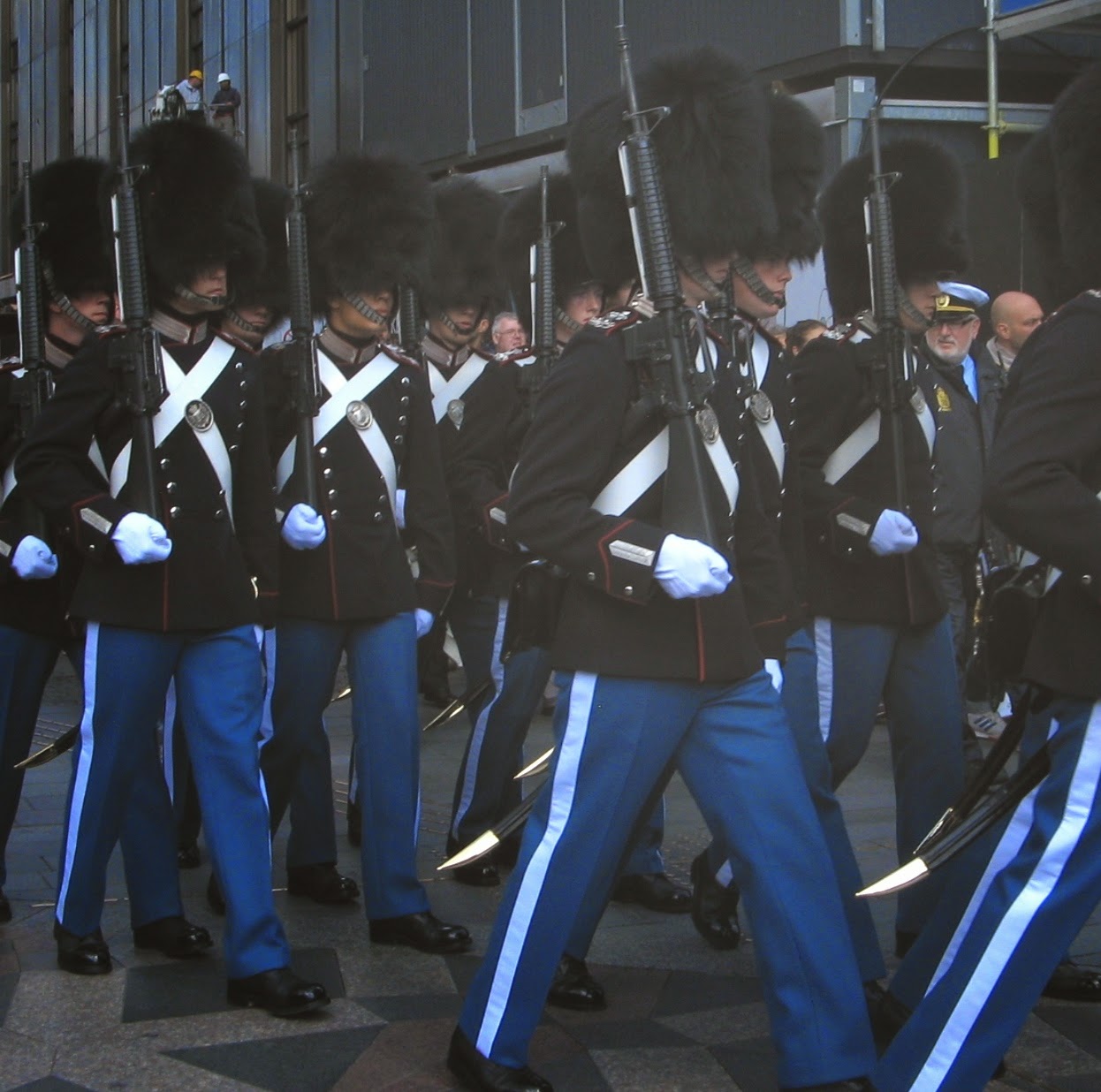 Copenhagen's Stroget is, at 1.1k, said to be the longest pedestrianized shopping street in the world.  With its eclectic mix of shops, from high end fashion to ubiquitous chain stores to cheap souvenir and $2 shops, there is something for everyone and it is a joy to stroll its length unbothered by traffic. We planned to just window shop, however, couldn't resist spending some time in the Royal Copenhagen china shop, drooling over the beautiful, delicate pieces on display.  In the end my daughter-in-law succumbed and bought some pretty little bowls. They will hold great memories. Lingering  at Royal Copenhagen was fortuitous because just as we left the shop the Royal Danish Guard came marching by on their way to the Royal Palace.  My small grandson was beside himself with delight at the sight of the soldiers resplendent in their blue and navy uniforms carrying their rifles and marching to their band.﻿﻿

Other notable shops on Stroget include Georg Jensen, the spectacular Danish silversmith, Illums Bolighus for Danish design pieces and Lego, Denmark's famous toy company's flagship store. If you are affluent, or at least want to see where the affluent shop, Birger Christensen is very high end and the only stockist of Chanel in Denmark.  And, of course, there are Louis Vuitton, Armani etc.,  Down at the Kongens Nytorv end is Tiger.  Laid out over several floors this is the Danish equivalent of a $2 shop but with incredibly good products of Danish design.  We spent a long time in there and bought up large.  Tiger is fantastic value, I highly recommend a visit.   Morning tea was at the famous Lagkagehoust bakery with its vast selection of mouth watering cakes and pastries...what can I say?...just yum!
﻿﻿﻿﻿

Later in the day we enjoyed a truly Danish fish smorrebrod (open sandwich), washed down with Danish beer, aboard a boat moored on the canal.  The fresh fish had been caught that day and it was delicious.


﻿﻿
﻿﻿ Our evening's entertainment was to go to the Tivoli Gardens.  You cannot go to Copenhagen without a trip to Tivoli.  Opened in 1843 Tivoli is a wonderful mix of theme park, beautiful gardens, restaurants and, at night, superb lighting.  Many people go to Tivoli to dine and people watch from the many attractive restaurants ranged around a central lake complete with pirate ship and, of course, the rides are a magnet for the young.
﻿

Tivoli has retained some of its original rides and has kept old traditions alive. One of these is the regular performance of the ballet Pierrot and Columbine on the stage of the Oriental Theatre.  We arrived just as it was starting which entranced my grandson. For me the best part of our visit to Tivoli was watching his delight, enjoying the gardens and watching Tivoli's magical transformation as the lights came on around the park.

Tivoli is a fun place, a perfect place for a family outing, it is beautifully maintained with glorious gardens and offers something for everyone.  Our visit to Tivoli was the perfect way to end our stay in Copenhagen.

Posted by a wandering widow - solo travel at 18:23 No comments: