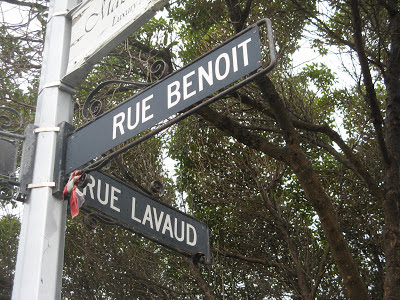 If you didn't know the history of Akaroa before arriving there you'd be surprised to see the street signs in French, the Boulangerie, the Boucherie and examples of French architecture in the town.  One of only two designated ethnic villages in New Zealand (I have written about the other village, the Bohemian settlement of Puhoi, in a previous post) Akaroa proudly displays its French heritage at every opportunity.  Set in an idyllic location on a large harbour, Akaroa means long harbour in Maori, it was first settled by Maori  700 - 800 years ago. Captain Cook sailed into the harbour in the late 1700s and whalers from various countries used it as a base in the 18th and 19th centuries.  However, it was a French whaling captain, Jean Francois Langlois, who negotiated a land deal with local Maori which he took back to France and it was as a result of this deal that 60 French settlers arrived in Akaroa in 1840.  The French had hoped to lay claim to New Zealand but had been beaten to it by the British who had signed a treaty with the Maori earlier in 1840.  Nevertheless the French remained, settling in Akaroa where their descendants still live today.

Unfortunately it was drizzling  the morning I decided to take the Akaroa Shuttle from Christchurch to Akaroa, an hour and a half away.  That didn't dampen my enthusiasm, though, and I enjoyed sitting in cocooned comfort watching the beautiful scenery of the Banks Peninsula pass by, listening to the informative commentary and enjoying the occasional stops for coffee and photo opportunities.  If you don't have a car the Akaroa Shuttle is very good value.  A return trip costs just $45NZ. 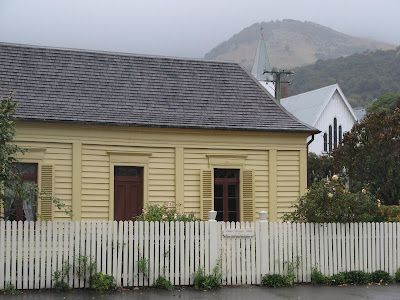 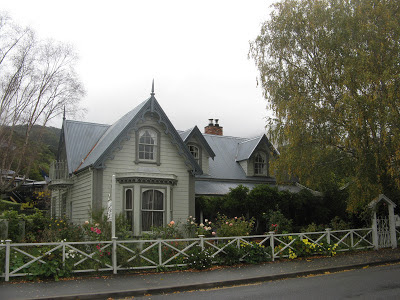 The village of Akaroa is a delight with pretty little boutique shops and galleries, waterside eateries and restaurants, and tranquil seaside and bush walks  I had been there before, only briefly,...and it was raining then too!...but this was my chance to have a whole day picking and poking around and enjoying the history of the area. And I did enjoy it, weather not withstanding. The entire town, with a population of less than 600, is registered with the Historic Places Trust as an Historic Area due to its large number of surviving 19th century buildings. The town has two centres, the English having settled at the south end of the village and the French to the north.

These are at opposite ends of the town. 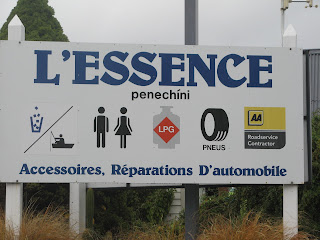 Right:  Even the service station advertises in  French


The day I was there was the day of the town's harvest festival.  Large marquees were set up on the village reserve where local farmers, orchardists and artisans displayed their produce for judging.  I loved it, huddling side by side, out of the rain and sitting on hay bales with the local farmers in their raincoats, shorts and gumboots, drinking coffee and sampling local cheese, while their children frolicked about the tent waiting anxiously for the judging of the scarecrow competition.  It was so good to be a part of honest, down to earth, rural New Zealand, if only for a short while. Although, some of the stall holders outside in the rain looked less than joyful, I have to admit. 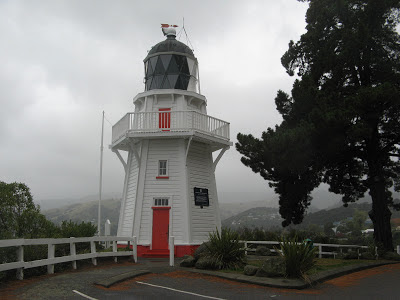 It was easy to spend a few hours visiting the beautiful historic buildings, window shopping, finding a really nice cafe to have a bowl of hot soup and a glass of wine while looking out at the harbour.  I walked to the picturesque light house and started to walk to the historic cemetery but the rain got heavier and common sense prevailed.  Unfortunately the Akaroa Museum is currently closed as a result of damage from the Christchurch earthquake.  This was a shame because I was left with quite a bit of time to kill, sheltering from the rain,  before the shuttle arrived to take me back to Christchurch. Several people from the shuttle took dolphin watching cruises on the harbour but I had done similar cruises in the past so did not opt for that. 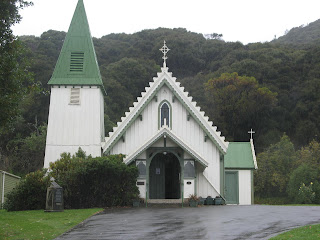 Nevertheless, I did love my trip to Akaroa and I say that if I loved it on a drizzly, cold, miserable day it must be just wonderful to see it on a good day.

Left: St Patricks Catholic church built in 1864.  The site of the first Mass said by French Bishop, Pompallier, in the South Island


www.akaroa.com
Posted by a wandering widow - solo travel at 20:01 No comments: