What better way to spend a glorious autumn day than to travel from Auckland to Coromandel by ferry?  I work as a tour guide at the National Maritime Museum of New Zealand and  was off on a work trip with a group of colleagues.  We had been invited as guests of the Mercury Bay Museum in Whitianga on the Coromandel Peninsula. Skimming across a flat azure sea under clear sunny skies, past verdant islands and contented fisherman lolling about on their boats the two hour trip sped by in a flash.  At Coromandel we were met by a bus which ferried us over the high ranges to the beautiful township of Whitianga.  It had been many years since I had been there camping with my family and I am pleased to say that although it has grown somewhat the town still retains its quiet, laid back charm.


There's no doubt about it, small towns sure know how to make visitors welcome.  The enthusiastic volunteers and trustees of the Museum greeted us with afternoon tea, wine and loads of good conversation. Housed in a former dairy factory, the museum is impressive and although it covers many aspects of New Zealand life there was more than enough maritime history and information to keep us engrossed. Over two days we were treated to lectures on coastal trading, Captain Cook and the wreck of The Buffalo, which occurred just off the town's long golden sand beach now named Buffalo Beach. The ship still lies off shore and can be seen from the air, at times, lying in its sandy grave. I found all the lectures absorbing and valuable, it's always satisfying to learn new things and increase your knowledge.


This visit exceeded my expectations.  Our hosts were warm, hospitable and fun to be with.  Their information and knowledge helped broaden ours.  We have invited them to join us at our museum and look forward to hosting them sometime soon.
As I have mentioned before, I love getting up early in the morning and going for a walk, especially when on a holiday.  It was no exception in Whitianga. I wandered along the beach and all around the sleepy, early morning town.  Mist was swirling over the hills and the sun was just poking its head up behind them.  Fishing boats at anchor made perfect reflections in the dark mirror-like water.  Tiny colonial cottages with their curtains drawn sat in rose festooned gardens and the smell of coffee filtered out across the bay. I felt pangs of nostalgia remembering the happy times my husband and I  had shared here when our children were small.  Sadly, the camping ground we stayed at now houses luxury apartments.
Finally I found the lovely Harbour House Cafe on the waterfront  where I sipped coffee, ate breakfast and read the morning paper. I felt perfectly at peace with the world.

Then, all too soon, it was back to Auckland by bus.  My visit to Whitianga has whetted my appetite to return, only next time it will be for longer as there is so much to see around the area that a short visit cannot do it justice.  Our visit this time was for a purpose and one that was fulfilled many times over.  A big thank you to the trustees and staff of Mercury Bay Museum.  You have a fine museum, a real credit to you.

Posted by a wandering widow - solo travel at 17:13 No comments:

Sometimes it is way easier to go to something alone and  Japan Day in Auckland last weekend was one of those times.  Not because it wouldn't have been fun to share it with someone but because the crowds were huge and tight and it would've been hard to stay together.  I suspected it would be a bit of a squash but  as a Japanophile I had been hanging out for a Japan fix for a while so couldn't resist the urge to go.

Japan Day has grown bigger and more popular over the last few years and is one of the reasons I love living in New Zealand's biggest city.  I am a sucker for cultural festivals and with its multicultural  population Auckland now has its fair share.  Regular readers of this blog will know that I have a particular love for Japan and Japanese culture so on Japan Day I was in my happy place.

All things Japanese were on display, from ikebana, bonsai and calligraphy to kempo martial art, traditional dance and the strange, unique Japanese street fashions  of Lolita and Gothic Lolita.

Visitors could try their hand at calligraphy, play Japanese board games, dress up in a kimono or sample the potent Japanese beer (8% alcohol).

There was a stage for J-pop performances and another stage for traditional dance and song.  The tiny tots from Auckland's Japanese kindergarten were little scene stealers

Food stalls offered sushi, okonomiyaki (one of my favourite light meals) sashimi, teriyaki, green tea ice cream and a myriad of other taste delights.  I wandered around with a big smile on my face snapping photos here and there and pretending I was on holiday in Japan. The steady drizzle didn't dampen my spirits nor, anyone else's, it seemed.


And here, as promised, is the easy recipe: 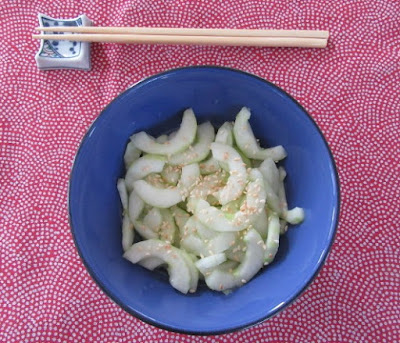 Peel and half the cucumber lengthwise.  Scoop out the seeds and slice the cucumber thinly. Mix all other ingredients together except for the sesame seeds.  Pour over the cucumber, stir and leave to marinate for an hour or two before eating.  Sprinkle the sesame seeds over to serve.
This is a great side dish, condiment or palate cleanser.  It is also superb served in sandwiches with roast beef.   It takes about 5 minutes to prepare and will keep for a day or two in the fridge.

Posted by a wandering widow - solo travel at 19:16 No comments: