Regular readers of this blog will know that I love the early morning and especially enjoy exploring new places at this clean, fresh, quiet time of day as a city slowly stirs itself from slumber and there are few people around. In Aarhus I was up early to do art walks of the city picking out  sculptures and buildings my mother had referred to in her book "It Was Better In Winter". Armed with a list, and keeping to my theme of travel with a purpose, I loved my solitary exploration of this pretty city.

﻿﻿﻿
Just around the corner from our hotel, in the park adjoining the City Hall, I found the first sculpture on my list, The Pig fountain. The mother pig with several piglets, is a humorous take on motherhood and much beloved by the locals.

The adjacent City Hall, boasts the clock tower,  now used as the symbol of Aarhus.  Designed by Arne Jacobsen and Erik Moller in 1941, and with the clock unusually positioned at the bottom half of the tower,  it is internationally recognised as an outstanding example of Danish Modernism.  It is listed as an important structure in the Danish cultural canon. 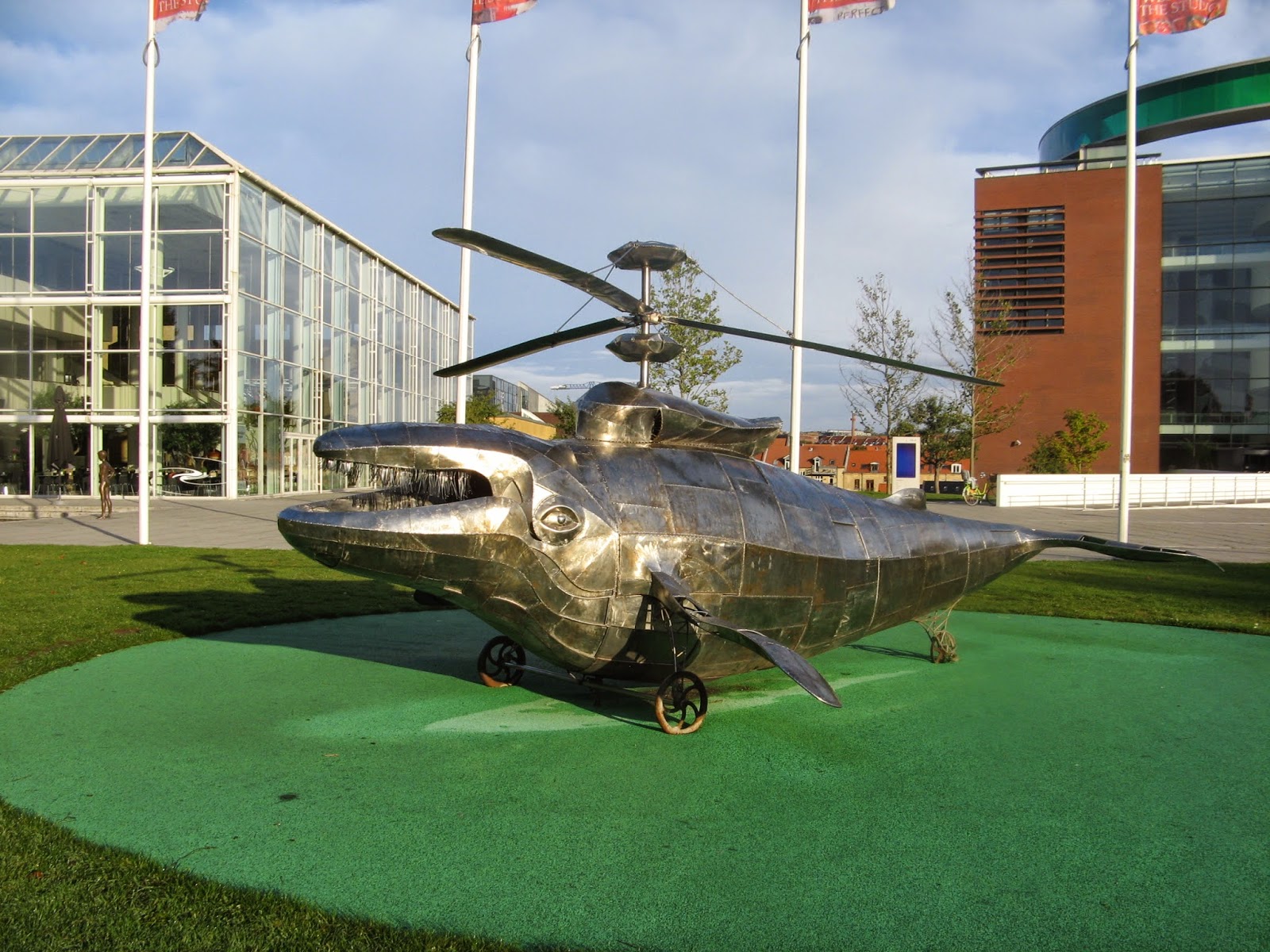 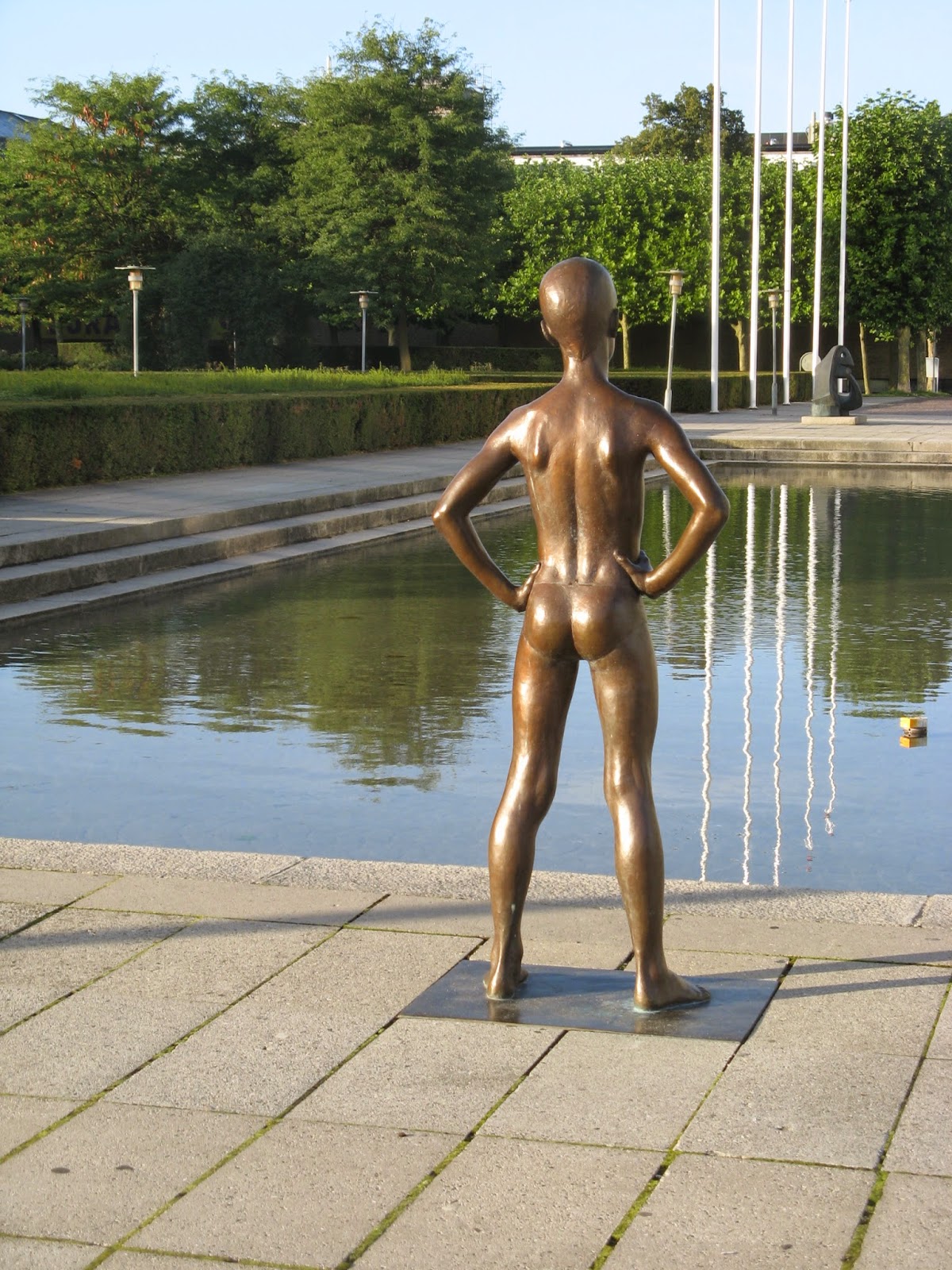 With a population of just 260,000 Aarhus is spoilt for choice when it comes to the arts.  The city has its own symphony orchestra and is the home of Danish National Opera.  The modern concert hall, (1982) built since my parents time, boasts annual ticket sales of 700,000.


Later in the day I visited AroS, the spectacular modern art museum (1997),  crowned
by a stunning circular walkway called Your Rainbow. At 150 metres long, and with graduated, coloured glass panels, Your Rainbow  provides 360 degree views of Aarhus through, literally, rose coloured, and blue and orange and gold coloured glass. 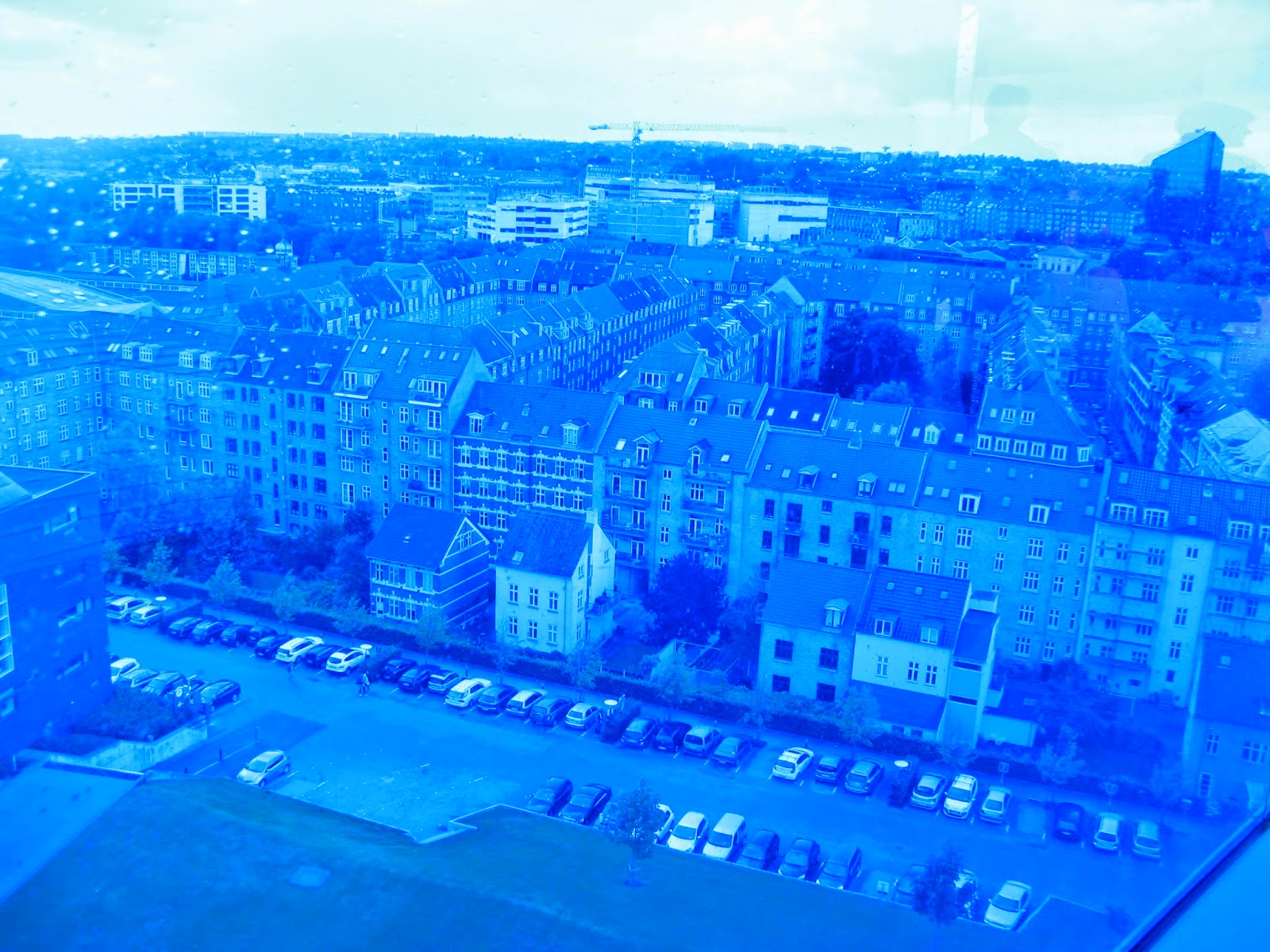 Left and below: Views of Aarhus from Your Rainbow atop ARoS Art Museum, Aarhus 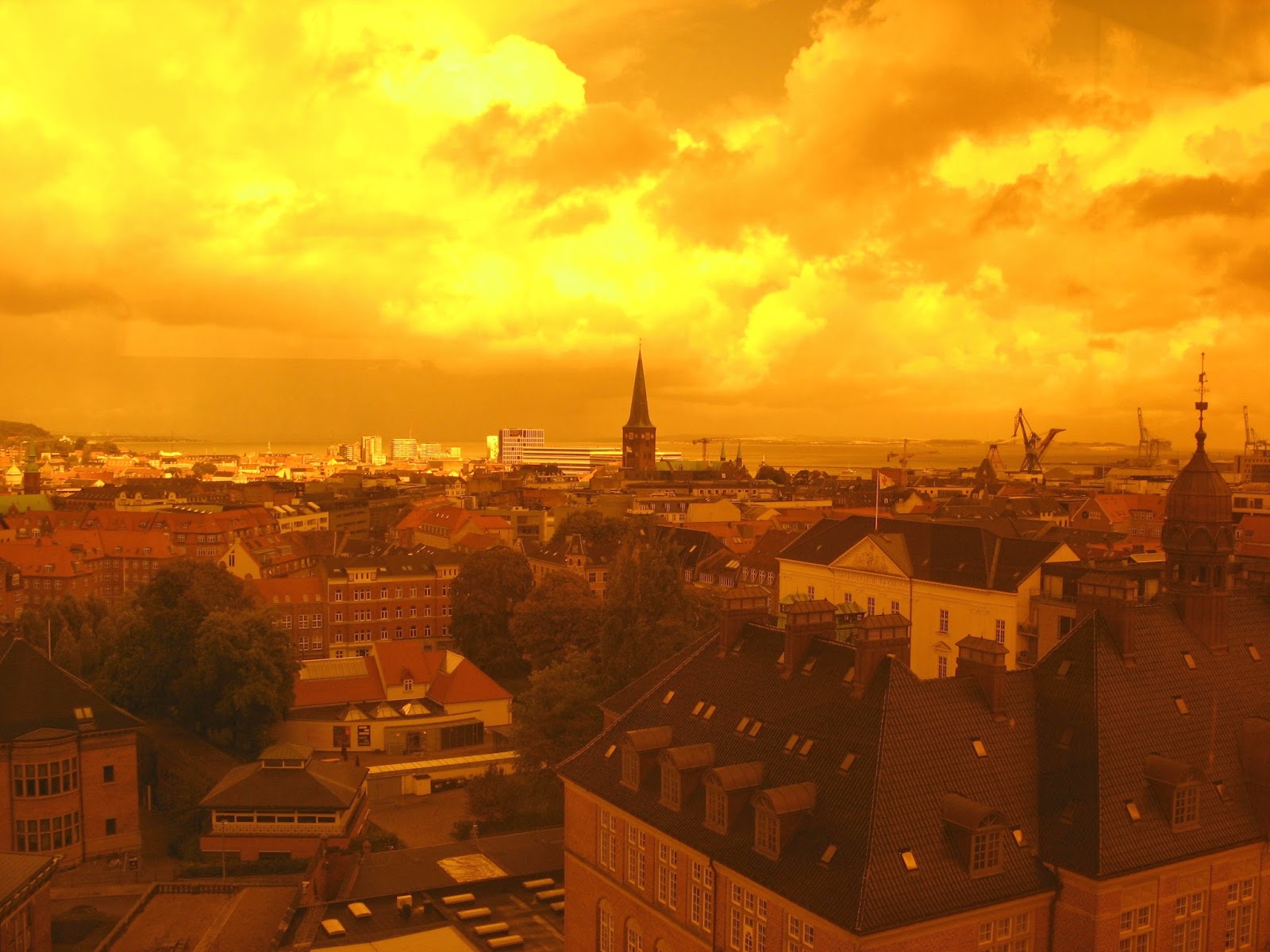 Right:  The spire in the distance is the Cathedral.  My parents lived very close by. 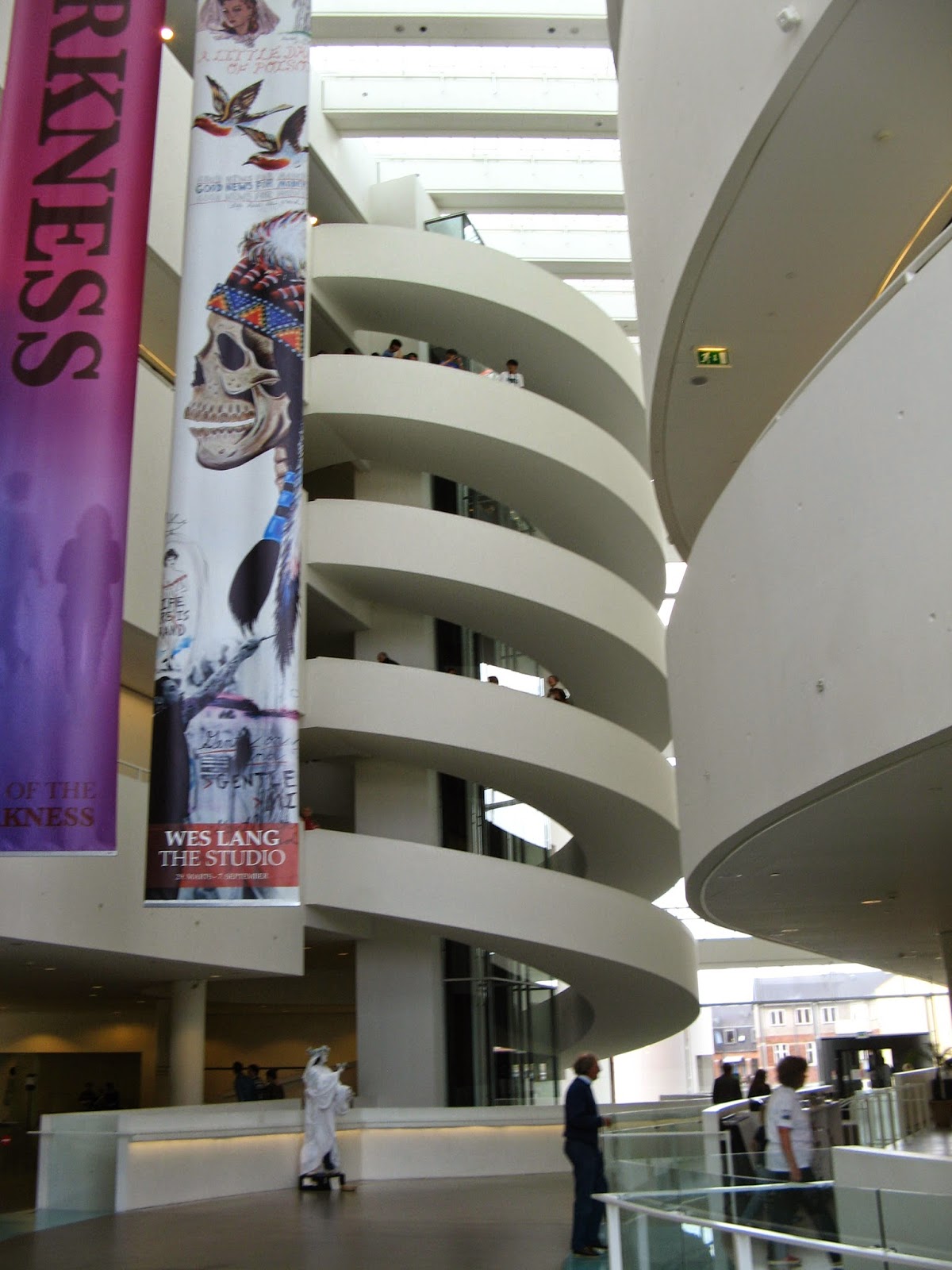 The interior of the museum is stark, white, bright and interesting.  A wide, gently curving, ramp leads from one floor to the next over 10 stories. The art museum contains 7000 works of art including many by Danish artists. I enjoyed discovering artists I had never heard of before and was completely intrigued by Boy the 4.5 metre high, 500kg sculpture by Australian artist, Ron Muecks.  Boy certainly draws the crowds and is so realistic it is hard to believe it is not a living, breathing boy.  I stood beside Boy for some time watching people's reactions on seeing it and enjoying the wonder in children's eyes.  It was a surreal experience. 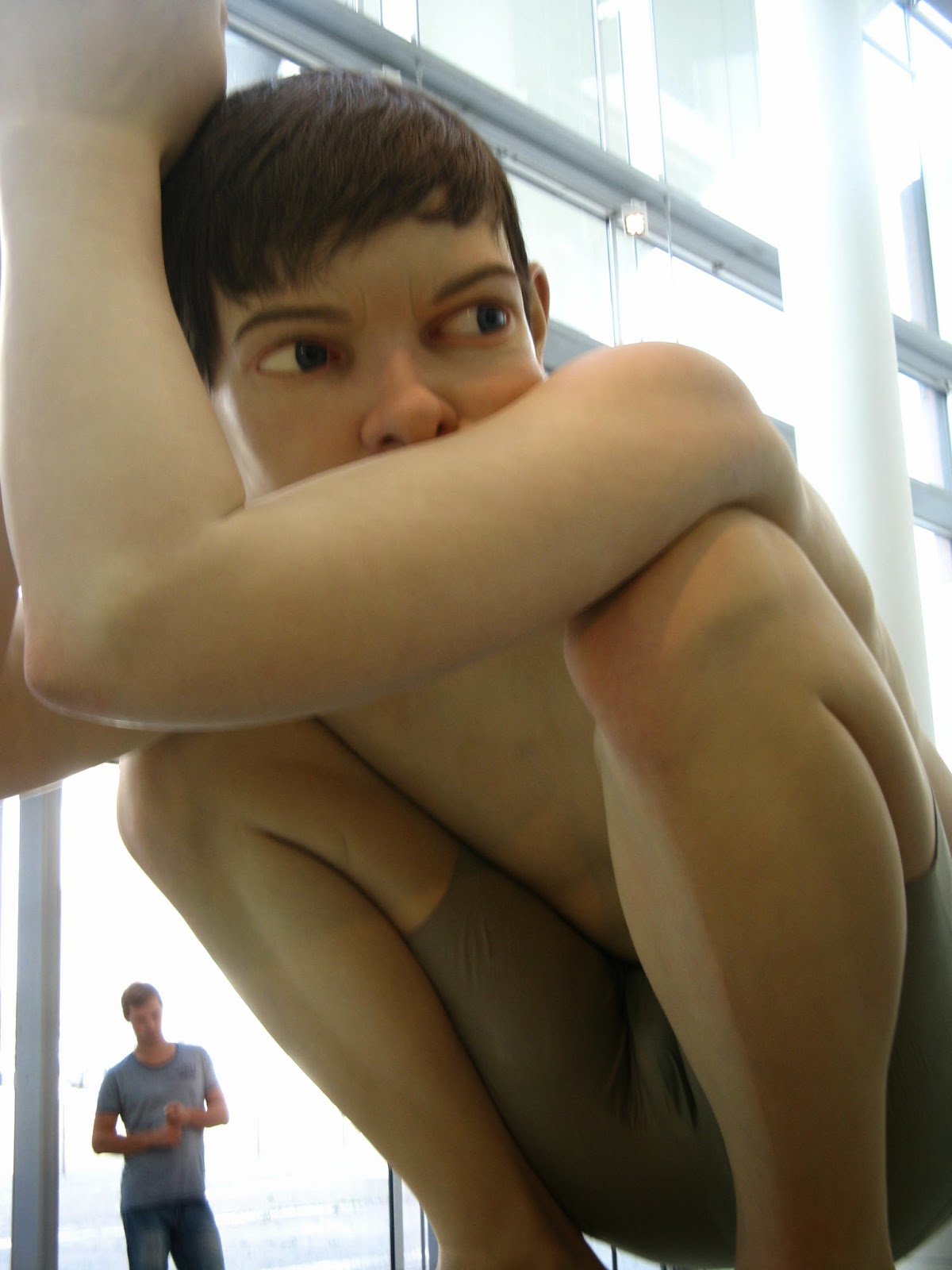 ﻿ ﻿
So far so delighted with Aarhus' art and architecture but I had one more thing to do this day and that was to visit the University of Aarhus where my father held a post as visiting professor for several months.  It was a long walk across town to the campus but thoroughly enjoyable, passing regular shops, cafes, art galleries, glass blowing galleries and a very quaint, uniquely Danish fire station.
﻿﻿﻿﻿
Aarhus is a university city the university's 42,000 students amounting to 16% of the
﻿﻿﻿﻿﻿ ﻿population.  The campus is lovely.  Built in the 1930s of golden brick it's many separate buildings are spaced out across rolling parkland.  It is a fine example of modern Danish design and is listed as one of the 12 most important architectural icons of Denmark.  It was a quiet Sunday afternoon when I visited with nobody around and all the buildings closed but I strolled for some time looking at the different faculties and wondering where my father worked.


What a thoroughly satisfying day it had been!  Not only had I traced many of the places my parents visited, and my mother mentioned in her book, but I had discovered several new ones and, best of all, I had enjoyed every moment. ﻿﻿﻿﻿

I particularly enjoy travel with a purpose.  When I worked on my family tree I enjoyed visiting ancestral villages and towns, I revelled in the art in Italy when I was studying art,  Canterbury when I studied the Canterbury Tales and various locations when I was studying ethnic music.  So it was that, with a spring in my step, I set out for Copenhagen railway station to catch the train to Aarhus.

﻿ Aarhus was a city my parents lived in for some months in the late 1960s and about which my mother wrote an excellent book - "It Was Better In Winter" by Joyce Reid, now no longer in print.
I was looking forward to seeing the Danish countryside and, of course, finally getting to see the city my mother had written about so eloquently.  The train trip took 2 hours and 50 minutes and, to be frank, the countryside was less than exciting being relentlessly flat with just the odd interesting building or bridge along the way.
I enjoyed the trip, though,  lost in my thoughts and entertained by the calm, patient, young woman opposite me who was knitting a glove.  She knitted it, made a mistake, unpicked it, knitted it again, made another mistake, unpicked it, knitted it again.....over and over until, when she finally left the train after a couple of hours, all she had to show for her efforts was a large ball of wool.

Arriving in Aarhus was exciting.  From the moment I left the train I began to spot landmarks my mother had mentioned in her book and my previous fears that much would have changed in the 40 odd years since my parents lived there were allayed.  I found my central hotel easily and immediately set off to find the hotel my parents had lived in for the duration of their visit.  A short walk through the city centre, past the
elegant opera house and the imposing cathedral and down to the waterfront onto Skolebakken and there it was, exactly as she described it, although now rental apartments.  I felt quite emotional imagining my parents living there as I stood on the pavement they must have walked hundreds of times.   Right opposite the building was the Falck, or rescue service, station which my mother had described in detail.  A new office block has gone up on the waterfront but I think apart from that little has changed since they lived there.

I took photos and then walked back to the Cathedral or Domkirke, with its red brick exterior and  cool, bright white interior and the ubiquitous boat hanging from the ceiling.  These boats were traditionally donated to churches by sailors as an offering for a safe trip home.

My mother loved to stroll the quaint narrow  streets behind their hotel with their brightly painted, half timbered houses all leaning higgledy piggledy against each other and I loved it too. 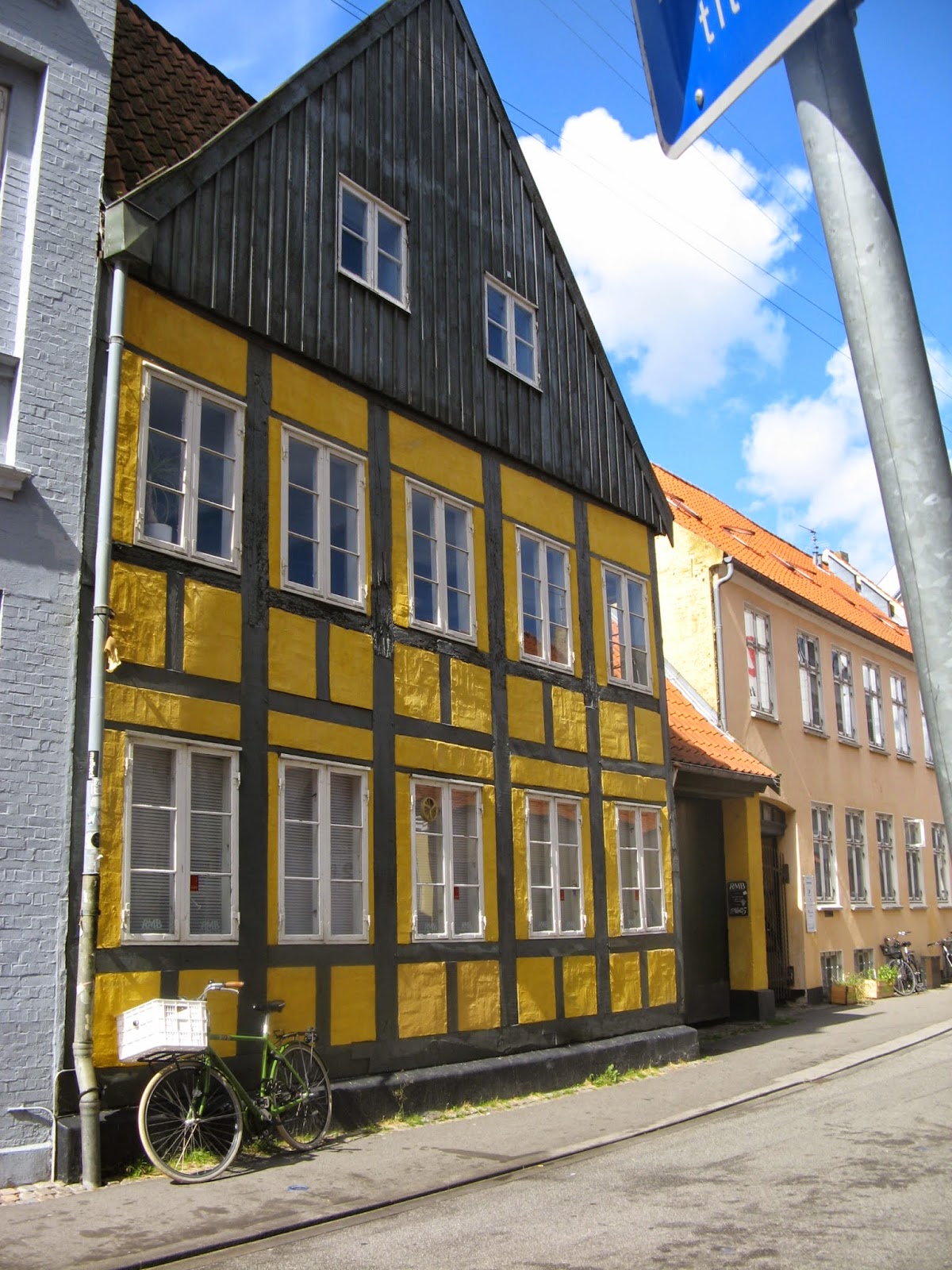 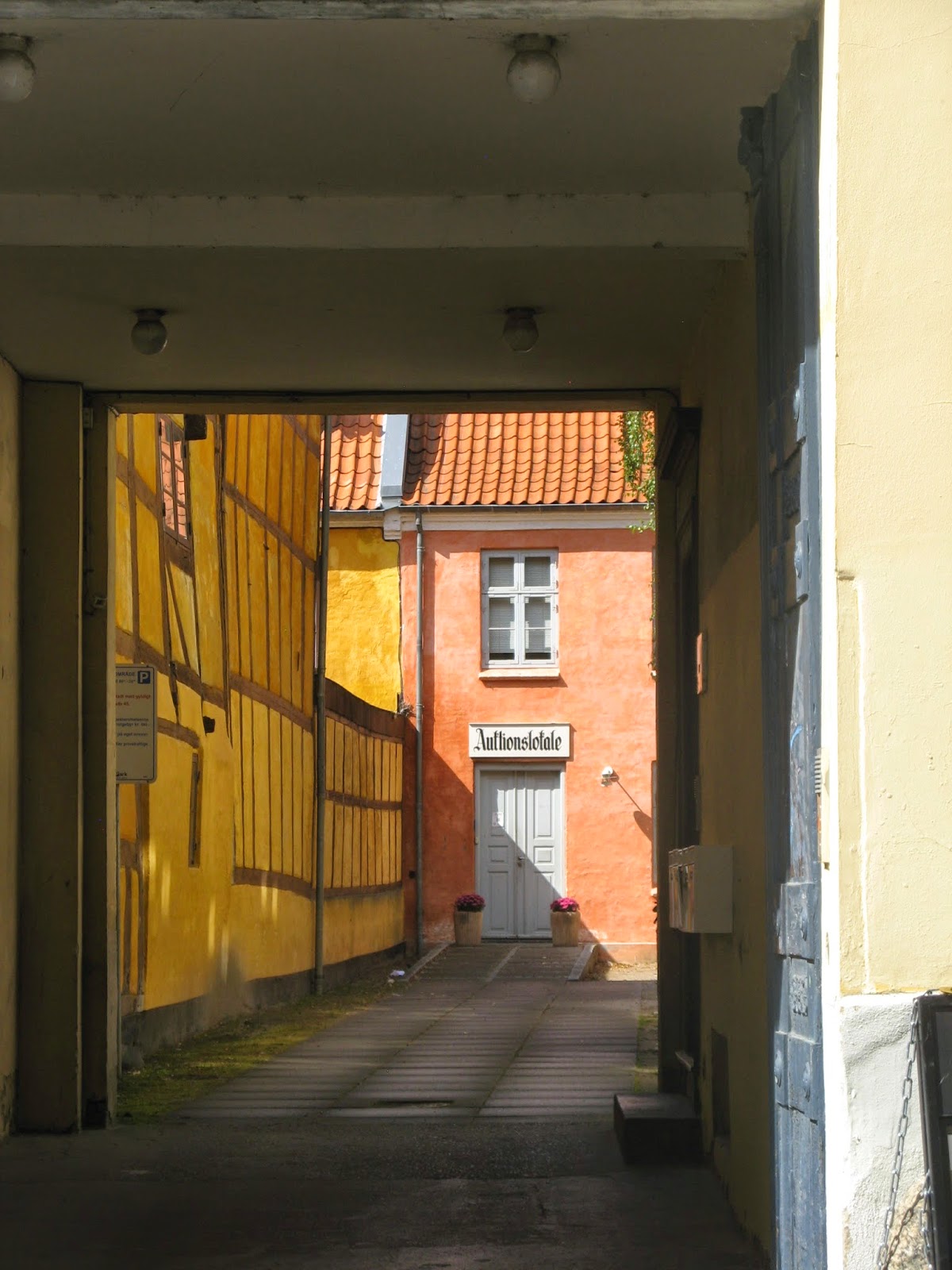 Many of the buildings house trendy shops, art galleries and coffee bars but, once again, I think little has changed. I spent quite some time in this old picturesque part of town, peering through narrow openings between buildings into quaint timeless courtyards and strolling over the cobble stones happily snapping photos.
﻿﻿   Eventually it was time to head back to meet my son and his family who were coming from Copenhagen on a later train.  I spotted them as I walked up the main shopping street and we spent the rest of the afternoon strolling around the inner city together before relaxing over a dinner of tapas and wine.  I was delighted with Aarhus and marvelled at how accurately my mother had portrayed it in her book.  Yes, as far as I was concerned, travelling with a purpose was totally satisfying and there was much more to look forward to.

Posted by a wandering widow - solo travel at 15:45 No comments:

Email ThisBlogThis!Share to TwitterShare to FacebookShare to Pinterest
Labels: Aarhus

Waiheke - Headland Sculptures on the Gulf 2015

In my post, " Waiheke Island - Headland Sculpture on the Gulf", (2/14/2013), I described  my visit to this biennial sculpture exhibition located on a glorious headland of the island.  At the end of the post I said that although it was my first visit to the event it wouldn't be my last.  So, true to my word, last week, together with my good friend, Pat, I headed out on the ferry,  to walk the two and a half kilometre sculpture trail while also enjoying plenty of sunshine and stunning scenery.

There are 31 sculptures and installations along the trail which winds its way over hillsides and through bush land. Some of the exhibits are challenging, some beautiful, some amusing and all creative. The event runs from 23 January to February 15. Here is a selection from the sculptures on this year's trail. 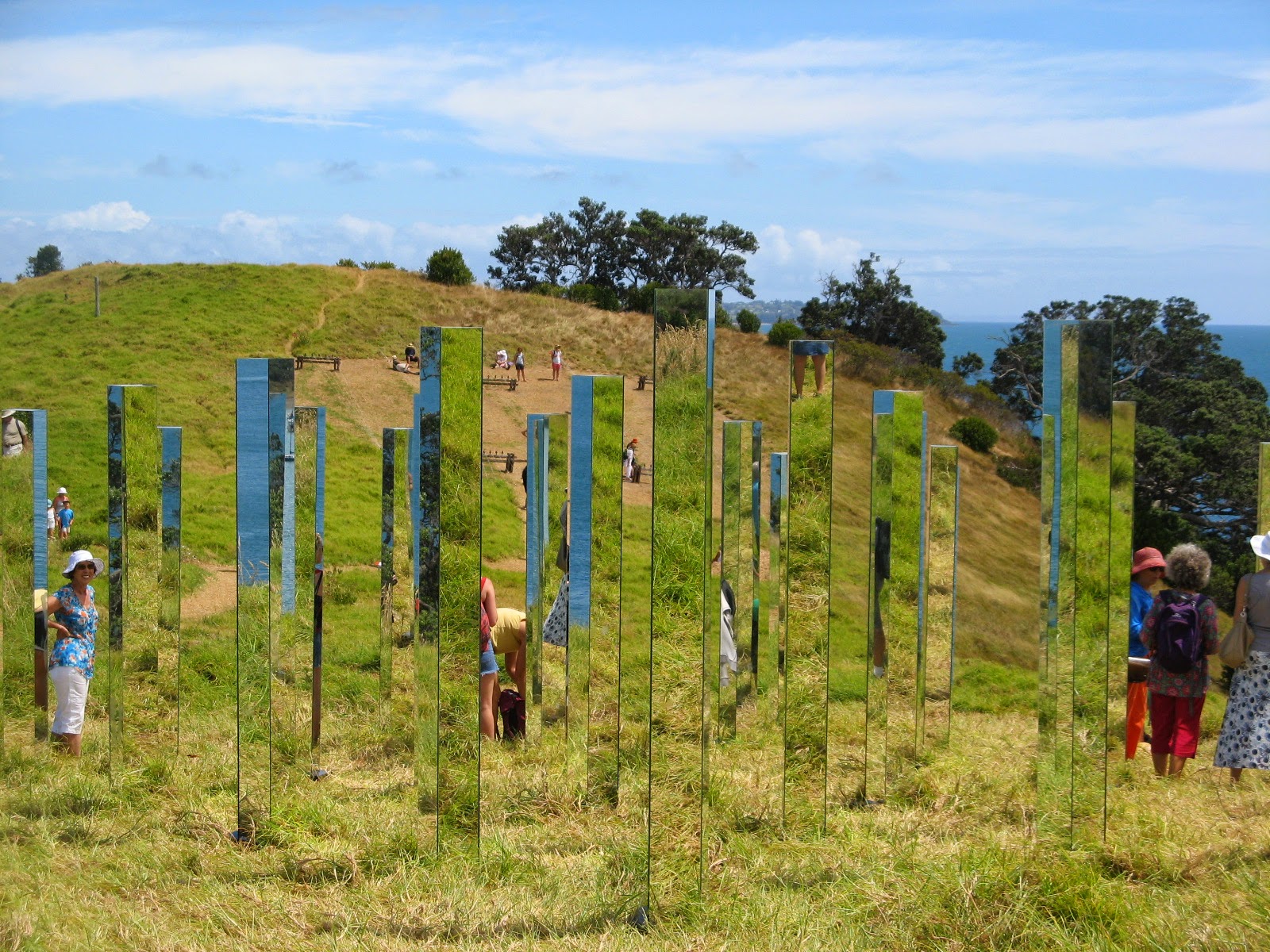 No 21 by Angus Muir and Alexandra Heaney Field Apart.

36 mirror columns with 144 mirrors reflect the ever changing sky and sea.  A fascinating and surreal experience for visitors to walk through. 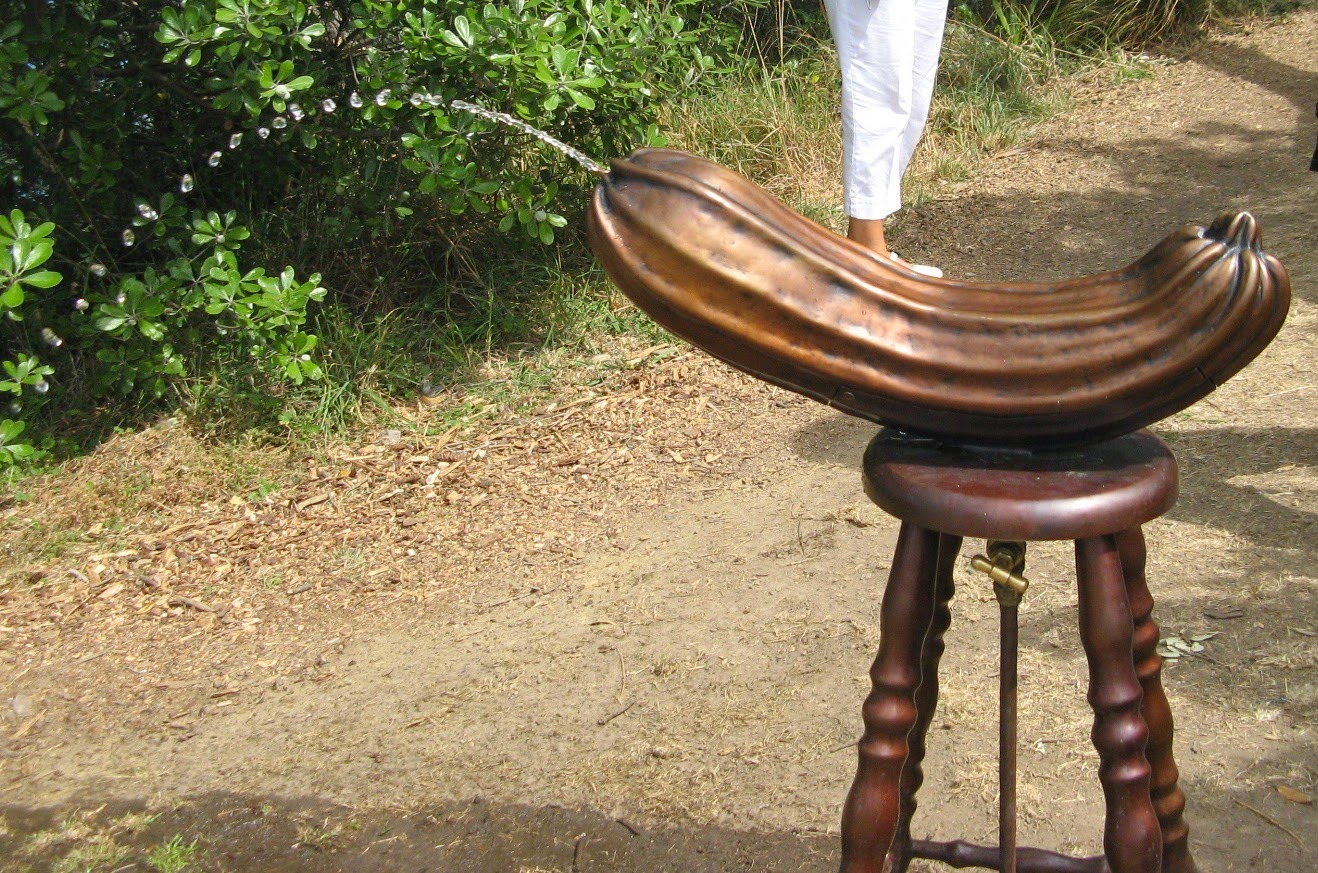 This work was inspired by a young boy playing with a marrow in the garden.  The marrow and water represent food and life for Scott's family. 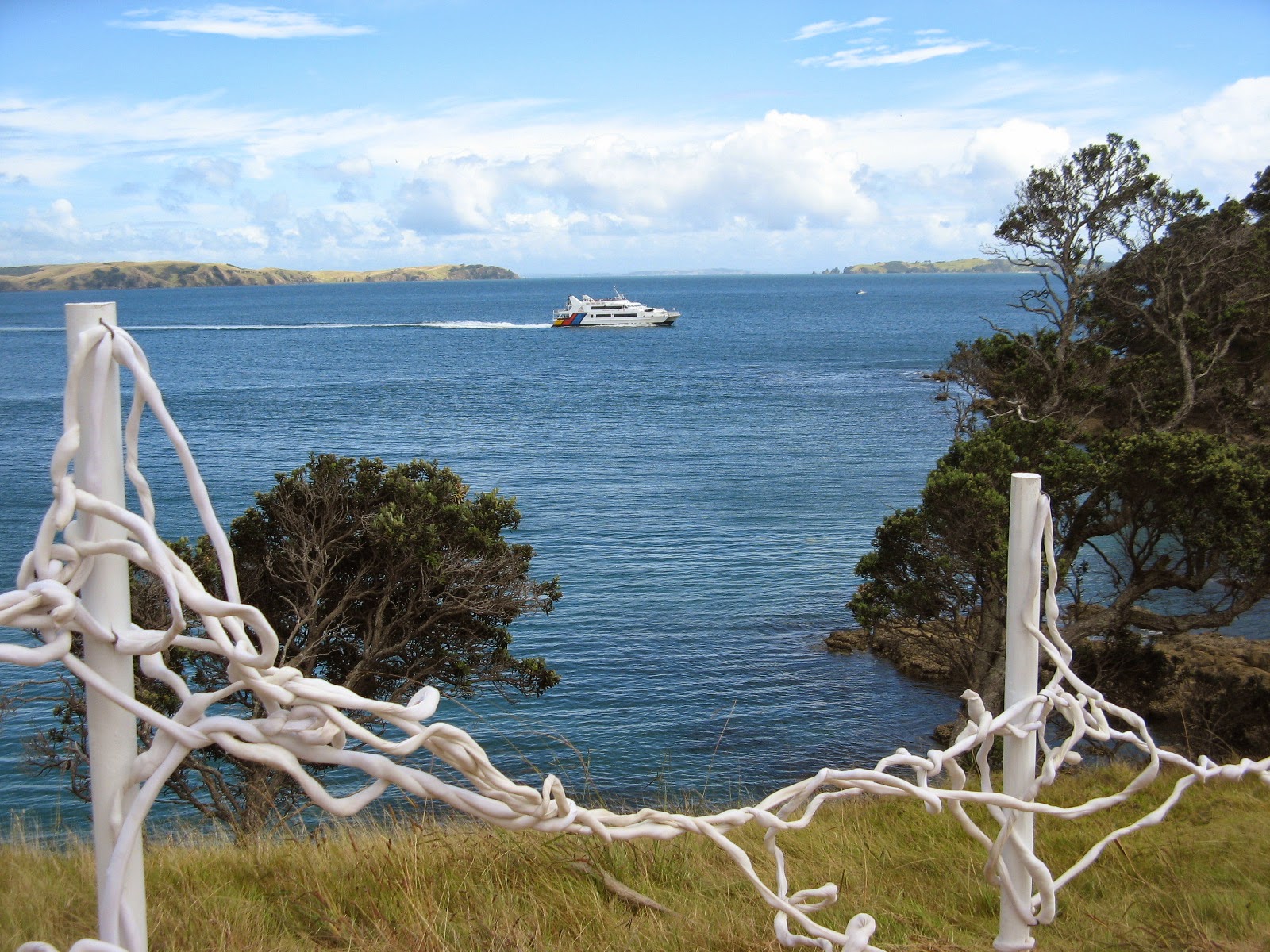 No 15 by Audrey Boyle the knot not and the not now.

This photo shows only part of what is a long fence of Dacron coated wire.  It is an interactive sculpture where the viewer is invited to tie new knots in the fence.  The fence represents the journey of life with its successes and sorrows. 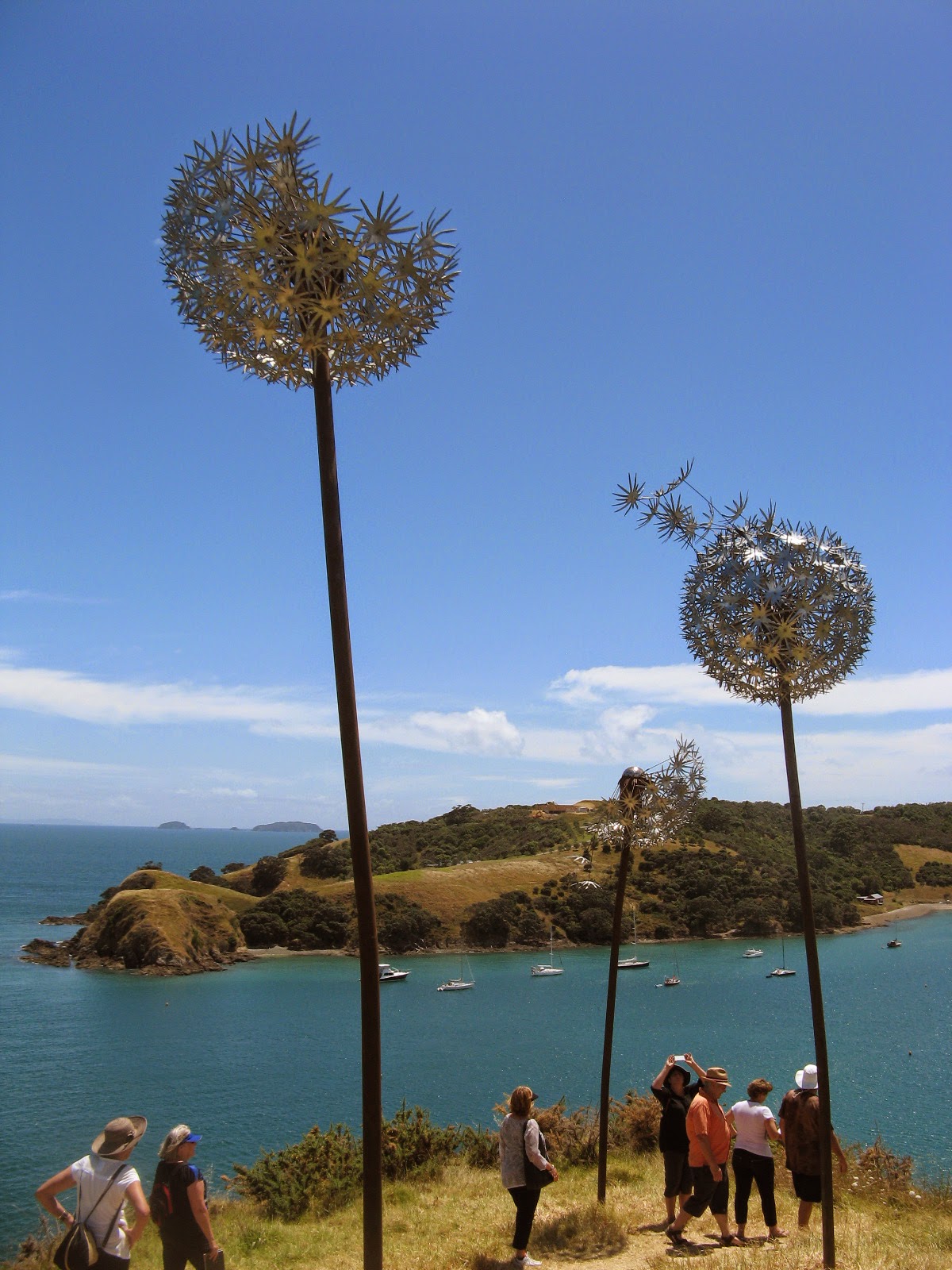 No 27 by Jane and Mario Downes Stop the Clock

This  kinetic sculpture of three dandelion heads at different points in time recall childhood memories of the playful use of dandelions to tell the time.  It is set on a headland to catch the wind. No 4 by James Wright Target

Life is full of challenges and sometime it takes a while to reach your goal.  This sculpture says "persevere and you will reach your target"

No 9 by Robert Jahnke and Joshua Campbell Tawhirowhiro 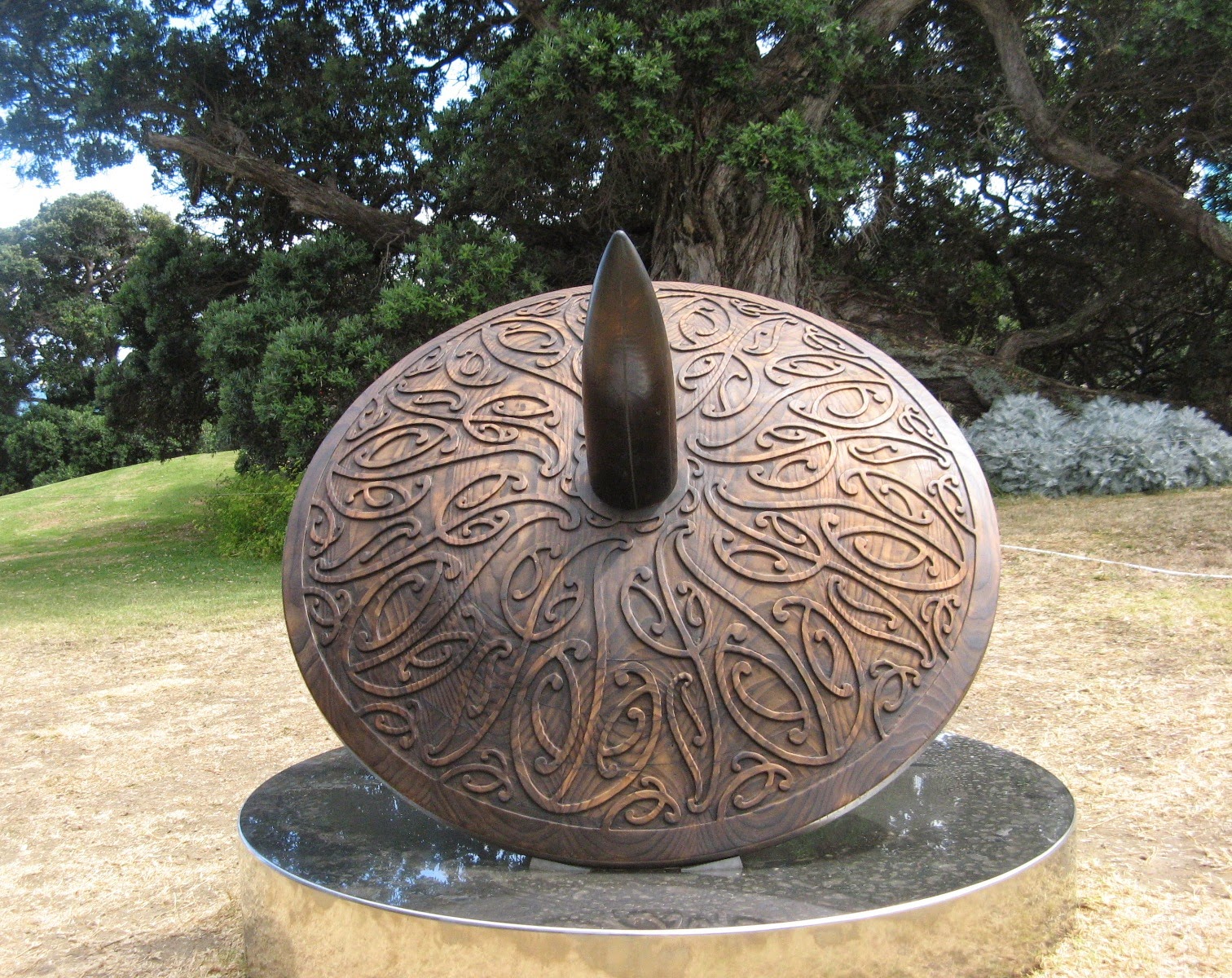 Tawhirowhiro means to spin or rotate in Maori.  Carved in wood which has been carbon charred it relies on the reflections in the stainless steel base and the swirling carved patterns to convey an impression of movement
﻿
﻿ 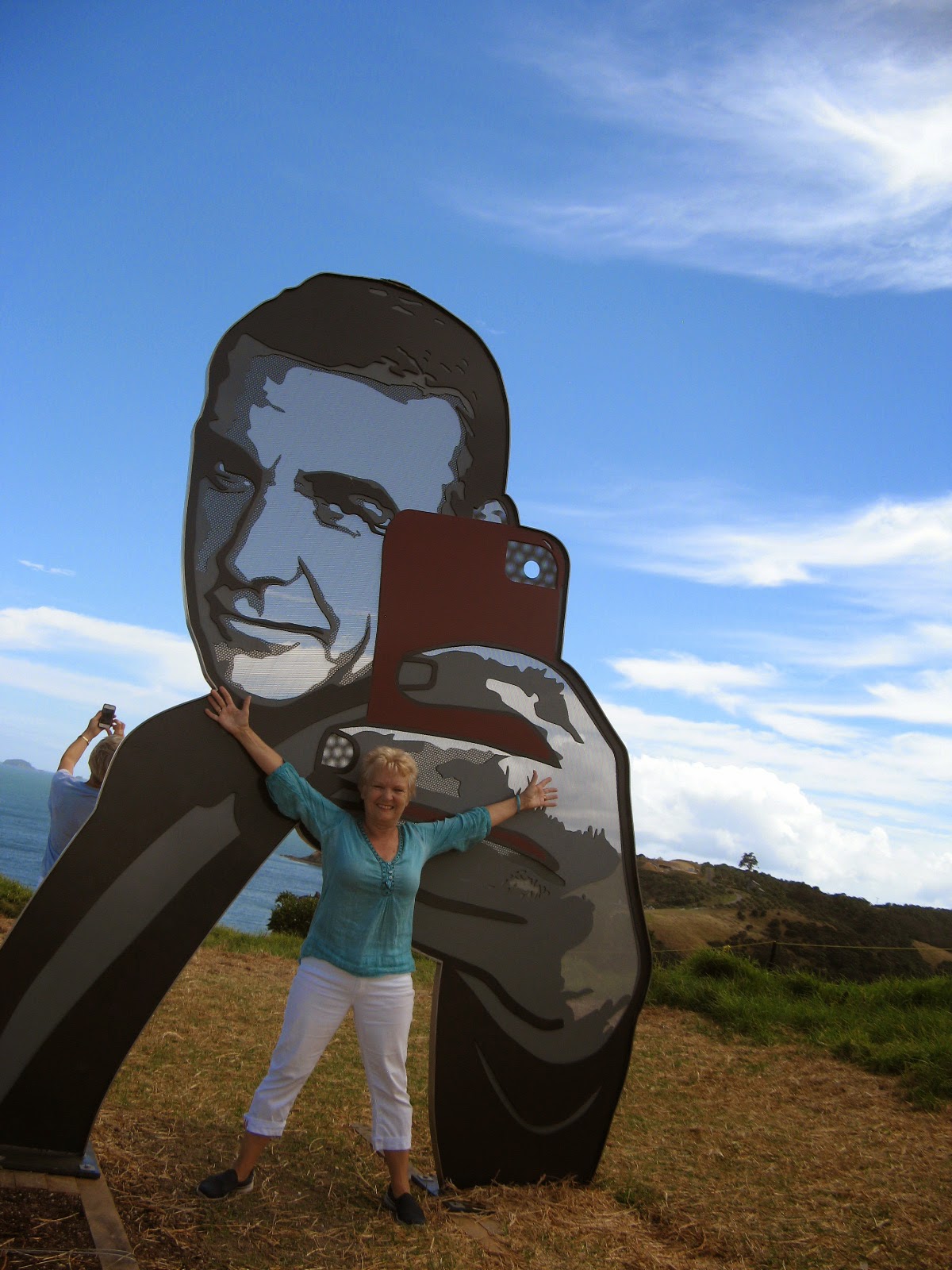 No 19 by Anah Dunsheath My Pic is my Bond

An ironic look at the current craze for celebrity selfies and, just to get into the spirit of things you understand, I simply had to have one of my own with Sean Connery 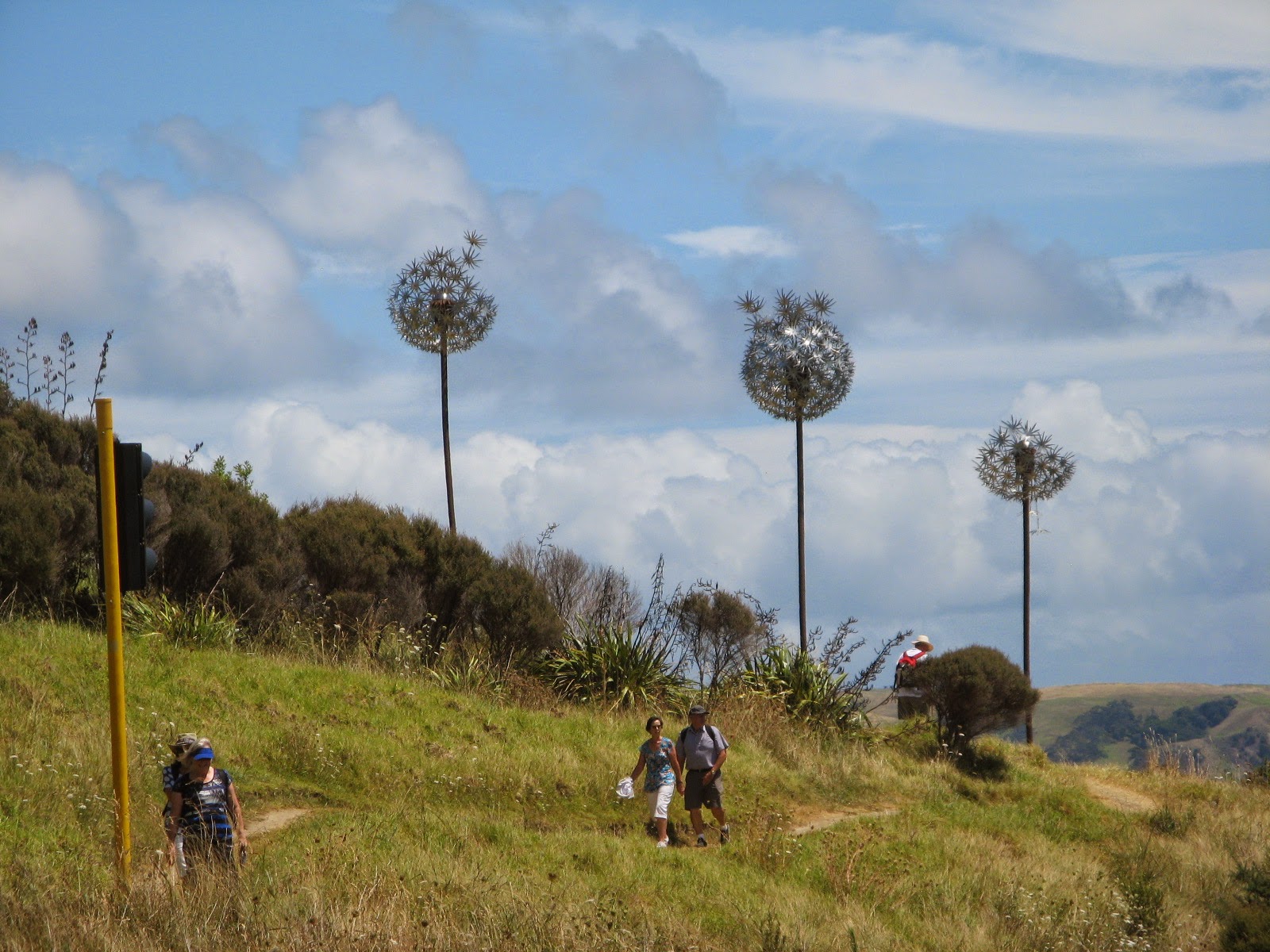 Walkers strolling past No 27 Stop the Clock

There wasn't a breath of wind on this day so the dandelions were stock still, as you can see. 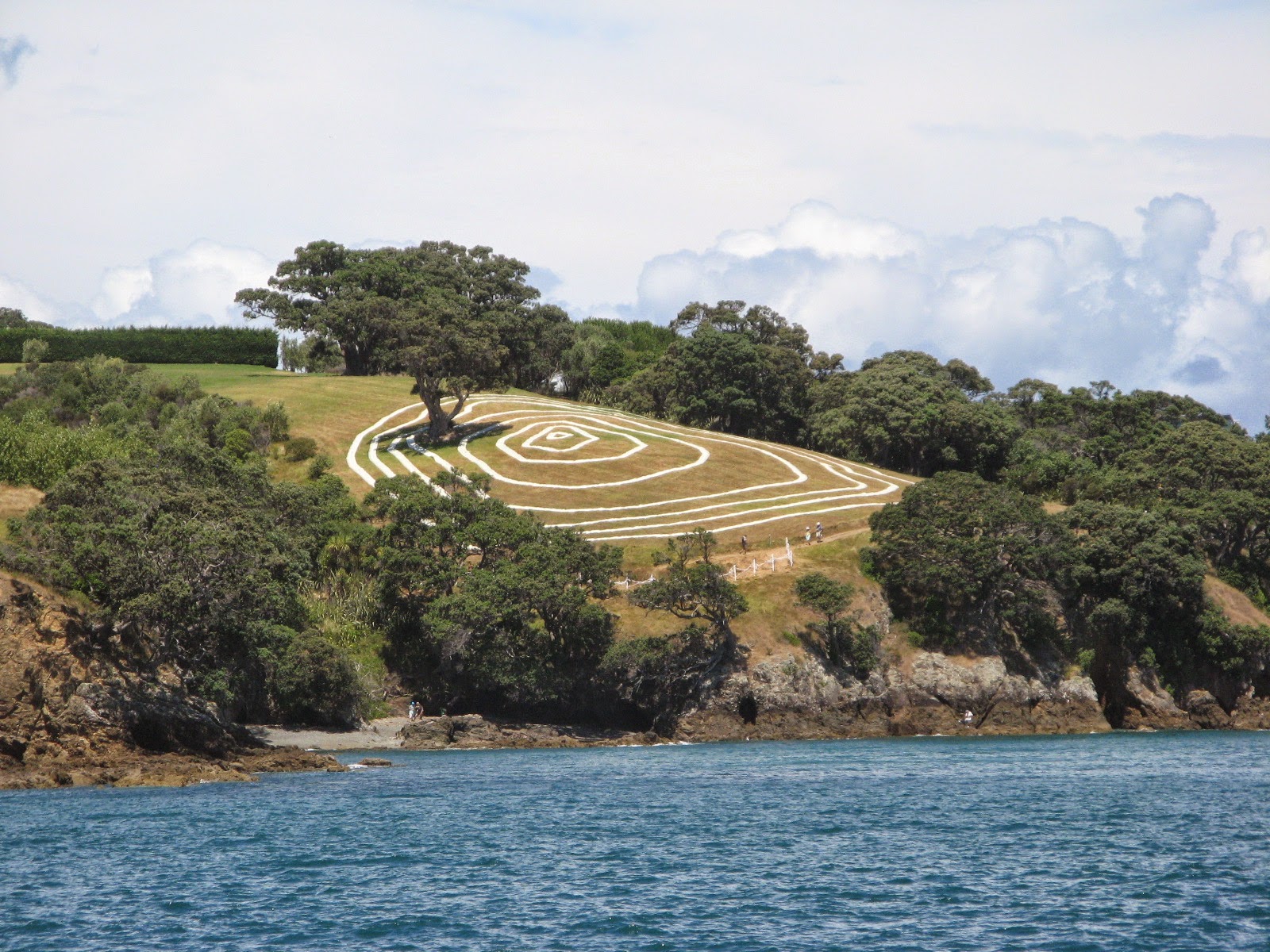 No 14 by Veronica Herber Landform as seen from the ferry

This installation, based on the contour lines used in mapping, was intended to provide a connection to the land while the viewer was still at sea.

The Sculpture exhibition is organised by a committee, supported by sponsors and 200 volunteers.  It is free to the public, however, donations are welcome.   It is a perfect day out and I highly recommend it.  I can't wait for  the next one in two years time.  For more information about Waiheke and the sculpture trail refer to my post of  2/14/2013 and their website as below.

www.sculptureonthegulf.co.nz
Posted by a wandering widow - solo travel at 17:57 No comments: