Istanbul - Hagia Sophia, Topkapi Palace and a cruise on the Bosphorus

Fortified by lunch we continued our sightseeing walk by crossing the square opposite the Sultan Ahmed Mosque to Hagia Sophia (Divine Wisdom). This magnificent landmark building was built in 537 as a Roman Catholic cathedral before being converted to a Greek Orthodox cathedral when the Greek church split from Rome It had another period as a Roman Catholic cathedral before,becoming a Mosque in 1453.  It remained a mosque until 1931 and is now a deconsecrated museum.  For 1000 years it was the largest cathedral in the world and is considered to be one of the best surviving examples of Byzantine architecture.  The interior is decorated with marble pillars and glorious Byzantine mosaics, many of which were plastered over during its Islamic period but have now been, once again, revealed.  A vast dome dominates the interior and to get the best views of the inside it is worth climbing up the steep cobble stone interior ramps to get to the gallery. It is an awesome place, in the true sense of the world, with a fascinating history.

The nearby Topkapi Palace was the main residence of the Ottoman Sultans from 1465 until 1856 when they moved to Dolmabahce Palace on the shores of the Bosphorus.  It is a Unesco World Heritage site and is described as "The best example of palaces of the Ottoman period".  In its heyday it was home to over 4000 people in what was a walled city spreading over many acres on a headland with wonderful views out to sea. It consists of large courtyards surrounded by multiple buildings, some of which are now treasure galleries housing collections of eye popping jewels, porcelain, weapons, manuscripts and clothes plus holy Islamic relics, including ﻿Mohammed's cloak and sword.  I loved the clothes gallery, goodness those Sultans must have been absolutely huge, judging by the size of the clothes!  I also loved the stunning tiling inside the buildings. We didn't go into the Harem, which cost extra and by late afternoon we were all too tired to bother.  Hint:  Get to Topkapi early and go to the treasure galleries first to avoid the crowds. We queued to get into the galleries but found strolling the other buildings easy and un-crowded. 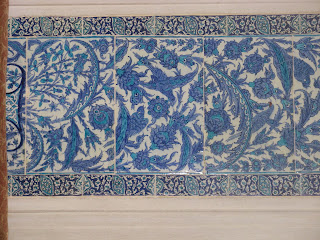 Well, what a day, so much seen, so much to take in...all fantastic and made so much more interesting by our eloquent Turkish guide who explained everything clearly.


Our evening meal was on the rooftop terrace of the delightfully quirky Hotel Kybele.  I fell in love with Turkish lamps at the Kybele where literally hundreds, of all different shapes and colours, hang from its ceilings. 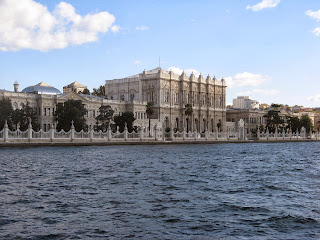 Next morning a 20 minute walk  took us to the waterfront and our own chartered  boat for a cruise on the Bosphorus.  It was a gloriously warm, sunny day and pleasantly relaxing  lounging on large Turkish cushions watching Istanbul's European waterfront slip by.  We passed luxury waterfront hotels and expensive homes and then the delicate and exquisite  Dolmabahce Palace before landing beside the large stone Fort of Rumeli.  This was built in 1451, in an astonishingly short 4 months, to protect the inner harbour of Istanbul.  It eventually became a prison and then fell into disrepair but is now largely restored and provides stunning views out to the Golden Horn and down the harbour.  We climbed up the steep, perilous, unrailed  staircases to the top of the walls to take in the views and then, of course, had to clamber down again which was nerve wracking, to say the least. 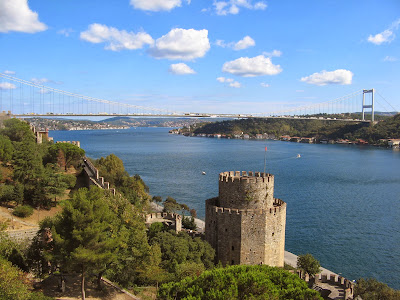 Back on the boat again and we were off to the Asian side of Istanbul.  It was fascinating to be in a city which is divided into European and Asian sides although there is little to show any difference.


We stopped at a picturesque fishing village for lunch where we bought luscious peaches, plums, goats cheese and bread rolls  which we ate sitting on the sea wall while watching fishermen mending their nets.  I wanted to make a note of the name of the village and seeing a sign carefully wrote it in my diary.  Later that day I asked our hotel owner if he knew it,  he laughed and told me that what I had written down was "Ferry Landing"

Posted by a wandering widow - solo travel at 17:34